Corn (Cash): The DTN National Corn Index (NCI.X, national average cash price) closed at $3.14 1/4, down 6 1/2 cents for the week. The NCI.X remains in a secondary (intermediate-term) downtrend on its weekly close-only chart. With weekly stochastics dipping below the oversold level of 20% the NCI.X could find support near $3.09 1/4, a price that marks the 61.8% retracement level of the previous uptrend from $2.85 1/4 through the double-top near $3.48.

Corn (Old-crop Futures): The September contract closed 8.75cts lower at $3.52. The secondary (intermediate-term) trend remains sideways in a wide range between resistance at $3.97 3/4 and support at the previous low of $3.48 1/4. Buying interest could return to old-crop corn as the September contract sits near support with weekly stochastics below the oversold level of 20%.

Corn (New-crop Futures): The December 2017 contract closed 9.00cts lower at $3.65 3/4. Dec corn's secondary (intermediate-term) trend remains sideways-to-down. With weekly stochastics already below the oversold level of 20%, and in position for a bullish crossover, Dec corn is holding above its low of $3.58 1/2. This could lead to the establishment of a secondary uptrend over the coming weeks.

Soybeans (Old-crop Futures): The September contract closed at $9.37 1/2 down 3/4 cent for the week. The contract's minor (short-term) trend turned up last week, with the bulk of support coming from commercial buying the September-to-November futures spread closed at a carry of only 1/4 cent, and could move to an inverse this coming week. Daily stochastics posted a bullish crossover indicating the change in trend. Given old-crop soybeans bullish commercial view, the September contract could look see at least a 50% retracement of its previous minor downtrend. This puts the price target at $9.77 1/4.

Soybeans (New-crop Futures): The November 2017 contract closed at $9.37 3/4 down 7 1/4 cents for the week. New-crop November beans look to be in position to rejoin its secondary (intermediate-term0 uptrend. The contract held support at $9.19 last week before rallying. 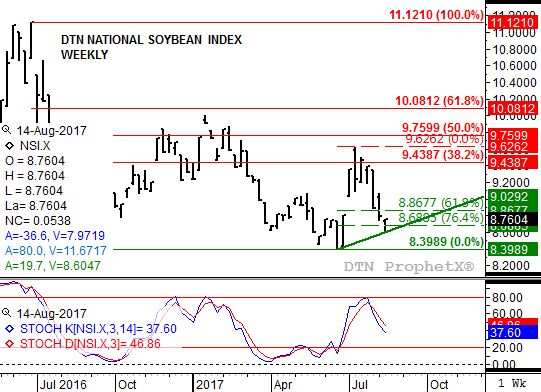 DARIN NEWSOM
9/2/2017 | 8:56 AM CDT
Good morning, and thank you for your message. I am working on both monthly (Saturday) and weekly (Sunday) updates this weekend. Thank you for your readership and your patience.
Unknown
9/2/2017 | 8:33 AM CDT
So we dont get your weekly analyst columns no more? Thats probably the most important artitcle i read every week to help me understand the market and make decisions...