SRW Wheat (Cash): The DTN National SRW Wheat Index (SR.X, national average cash price) closed at $5.02 1/4, up 77 1/4 cents for the week. The SR.X extended its secondary (intermediate-term) uptrend, testing resistance at $5.03. This price marks the 61.8% retracement level of the previous downtrend from $6.01 1/4 through the low of $3.44. However, weekly stochastics established a bearish crossover above the overbought level of 80%, a signal that the secondary trend is in the process of turning down.

SRW Wheat (New-crop Futures): The Chicago July 2018 contract closed at $5.86, up 15 3/4 cents for the week. Despite its higher weekly close, new-crop July Chicago looks to have established a possible spike reversal last week. Its new high was $6.09 1/2. Weekly stochastics are above the overbought level of 80% and in position for a bearish crossover.

HRW Wheat (Cash): The DTN National HRW Wheat Index (HW.X, national average cash price) closed at $4.73 3/4 up 18 1/2 cents for the week. Despite its higher weekly close the HW.X saw stochastics establish a bearish crossover above the overbought level of 80% on its weekly close-only chart. This signals the secondary (intermediate-term) trend has turned down.

HRW Wheat (New-crop Futures): The Kansas City July 2018 contract closed at $5.98, up 17 cents for the week. New-crop Kansas City wheat's secondary (intermediate-term) uptrend looks to have come to an end. Last week's spike to a new high of $6.23 before falling back not only established a possible spike reversal but created a bearish crossover by weekly stochastics above the overbought level of 80%.

HRS Wheat (Cash): The DTN HRS Wheat Index (SW.X, national average cash price) closed at $7.25 3/4, down 4 1/2 cents for the week. Cash HRS established the rare "Brachiosaurus" (dinosaur) pattern on its weekly close-only chart, with the slightly lower weekly close forming the head following the recent long rally (neck). The lower weekly close also established a bearish crossover by weekly stochastics, signaling the secondary (intermediate-term) trend has turned down. Initial support is pegged between $6.60 1/2 and $6.32 3/4, though the top end of the body is at support pegged near $5.32 1/2. This latter price marks the 67% retracement level of the previous uptrend.

HRS Wheat (New-crop Futures): The Minneapolis September 2017 contract closed at $7.66 3/4, down 5 cents for the week. The contract's secondary (intermediate-term) trend looks to have turned down. Last week saw September Minneapolis wheat post a high of $9.68 1/2 before closing lower, establishing a bearish spike reversal. This activity also led to a bearish crossover by weekly stochastics above the overbought level of 80%. The contract is already testing support at its 33% retracement level of $7.53 1/2, with the 50% mark down at $6.94 1/4. 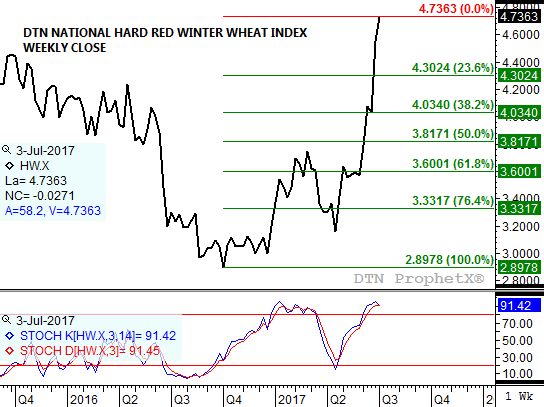