Lean Hogs: The June contract closed at $74.00, up $0.15 on the monthly chart. Lean hogs remains trendless on its major (long-term) monthly chart. This means the market could remain range-bound, albeit in a wide range between resistance near $87.05 and support at $40.70. Initial support is at the 4-month low of $52.55 with initial resistance at the 4-month high of $78.25.

Soybean meal: The July contract closed at $315.80, up $7.40 on the continuous monthly chart. Meal's monthly chart remains a complicated mix of signals. While it could be argued that the ongoing sell-off is Wave 2 of a major (long-term) uptrend, the current pattern looks to be a 3-wave downtrend of its own. Retracement support is pegged at $299.90 with monthly stochastics still neutral in the lower 30% range. 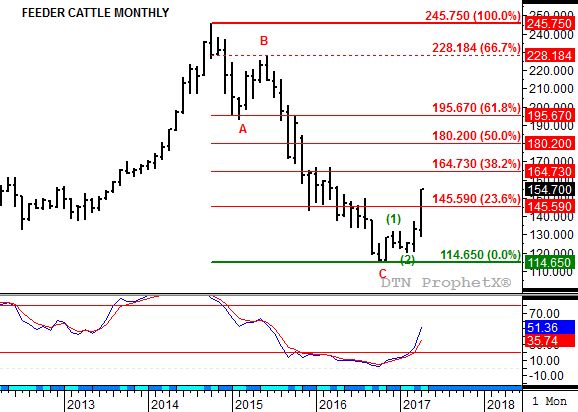