SRW Wheat (Cash): The DTN National SRW Wheat Index (SR.X, national average cash price) closed at $3.84, up 18 1/4 cents for the week. Despite the higher price technical indicators continue to show the secondary (intermediate-term) trend is down on the weekly close only chart. Weekly stochastics remain bearish, above the oversold level of 20%.

SRW Wheat (New-crop Futures): The Chicago July 2017 contract closed at $4.32 1/4, up 11 1/4 cents for the week. The contract looks to be transitioning from a secondary (intermediate-term) downtrend. However, the contract did post a new low of $4.16 before rallying last week. Weekly stochastics are below the oversold level of 20%, but may need to retest its low to set up a possible bullish crossover below this level.

HRW Wheat (Cash): The DTN National HRW Wheat Index (HW.X, national average cash price) closed at $3.41 3/4, up 25 1/4 cents for the week. The cash HRW market is showing conflicting signals, though last week's strong rally off its test of support near $3.18 1/4 (the previous week's price was $3.16 1/2) led to a new 4-week high (weekly close). This would suggest the secondary (intermediate-term) trend hast turned up, despite weekly stochastics not posting a bullish crossover below the oversold level of 20%.

HRW Wheat (New-crop Futures): The Kansas City July 2017 contract closed at $4.37 1/4, up 20 cents for the week. The secondary (intermediate-term) trend turned up last week as the contract completed a 2-week reversal on its weekly chart. Confirmation of this change in trend would be a move to a new 4-week high beyond $4.45 1/4. Buying interest could come from noncommercial short-covering as Friday's CFTC Commitments of Traders report showed this group moving to a net-short futures position of 2,251 contracts ahead of a spring blizzard/freeze across the U.S. Southern Plains that may have caused extensive damage to the HRW crop.

HRS Wheat (New-crop Futures): The Minneapolis September 2017 contract closed at $5.61 up 18 3/4 cents for the week. The secondary (intermediate-term) trend remains up based on the contract posting a bullish reversal the week of April 10. The contract also posted a new 4-week high of $5.64 as it posted another bullish outside price range.

The weekly Commitments of Traders report showed positions held as of Tuesday, April 25. 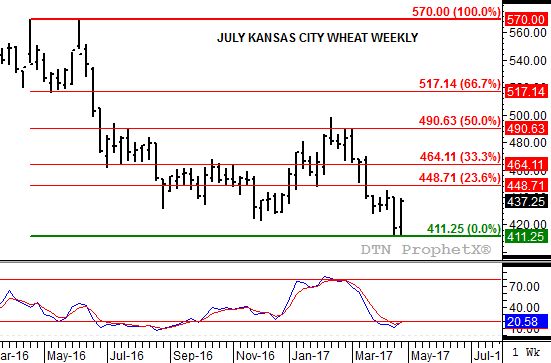