Live Cattle: The June contract closed $7.325 higher at $124.025. The contract spiked higher last week, establishing a new high of $124.225. Some of the rally was due to the expiration of the April contract at a large premium to the June, sparking increased commercial buying. Additional buying from both commercials and noncommercial traders was likely tied to forecasts of a spring blizzard moving across key feedlot areas of the U.S. Southern Plains. This could create a secondary (intermediate-term) spike top, though the market's major (long-term) uptrend continues to strengthen.

Feeder Cattle: The August contract closed $12.45 higher at $154.70. The contract extended its secondary (intermediate-term) uptrend, posting a new high of $155.10. The same weather factor that sparked a spike rally in live cattle (see above) were likely at play in feeder cattle, leaving the market vulnerable to a spike top over the coming weeks.

Lean Hogs: The June contract closed $5.675 higher at $74.00 last week. Despite the strong rally the secondary (intermediate-term) trend remains down. Last week's rally looks to be a function of spillover buying from live cattle, as the June-to-August lean hog futures spread continues to reflect bearish fundamentals, and a short-term uptrend on June hogs' daily chart that could soon come to an end. While weekly stochastics posted a bullish crossover, it was above the oversold level of 20% indicating the contract could at least retest its recent low of $67.775 in the coming weeks.

Soybean meal: The July contract closed $2.20 higher at $315.80. The contract remains in a secondary (intermediate-term) uptrend, consolidating between support at the recent low of $309.60 and resistance at the 4-week high of $323.60. Weekly stochastics are holding below the oversold level of 20%, still in position for a bullish crossover that would confirm the contract's bullish reversal the week of April 10. 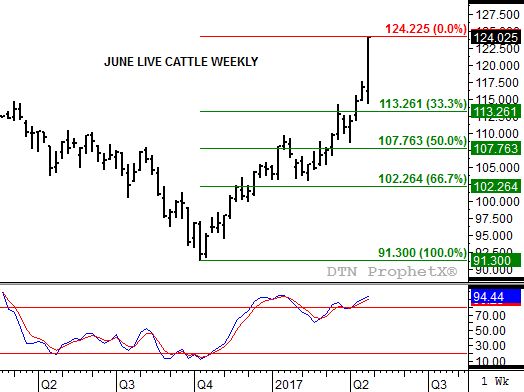