Distillates: The spot-month contract closed 4.61cts lower at $1.5072. The market remains in a 3-wave secondary (intermediate-term) downtrend. Wave C could now target initial support at $1.4148, the 38.2% retracement level of the previous uptrend from $0.8487 through the high of $1.7647. Given weekly stochastics are above the oversold mark of 20% the spot-month contract could test the 50% retracement level of $1.3067.

Ethanol: The spot-month contract closed 6.6cts lower at $1.558. Despite another lower weekly close the market remains in a secondary (intermediate-term) uptrend. However resistance at $1.681, a price that marks the 76.4% retracement level of the previous downtrend from $1.76 through the low of $1.425, continues to hold. Weekly stochastics turned neutral meaning the market could see its minor (short-term) downtrend extend into a third week on daily charts. Daily stochastics are below the oversold level of 20%, in position for a possible bullish crossover.

Natural Gas: The spot-month contract closed 17.5cts higher at $3.276. Last week's roll from the expiring May to June as the spot-month contract at a strong carry (contango) reflecting bearish fundamentals created a bullish outside range on weekly charts. However, the secondary (intermediate-term) trend remains down with the market still in Wave C (third wave) of a 3-wave downtrend. Nat gas could see continued buying push the spot-month to a tests of resistance at $3.432 before turning down again. Thee minor (short-term) trend on daily charts remains up. 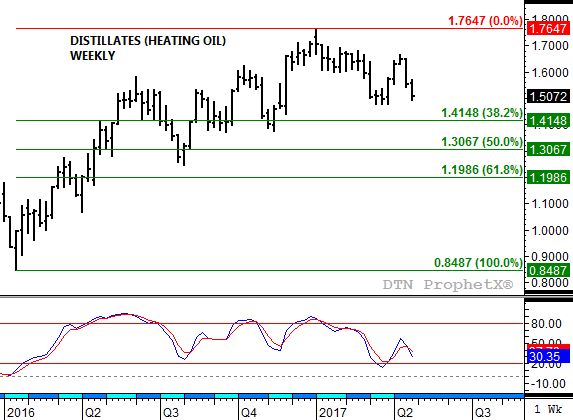