Corn (Old-crop Futures): The May contract closed 4.75cts lower at $3.59 1/2. The secondary (intermediate-term) trend remains sideways-to-down while the minor (short-term) trend on the contract's daily chart is up. While the clearest secondary picture is the market's weekly close only chart (similar to NCI.X), its daily chart shows May corn held support near $3.58 1/2 last week before rallying. This could lead to a retest of resistance between $3.70 3/4 and $3.74 3/4.

Soybeans (Cash): The DTN National Soybean Index (NSI.X, national average cash price) closed at $8.67 1/4, down 3 1/2 cents for the week. While the NSI.X remains in a secondary (intermediate-term) downtrend, weekly stochastics are nearing a bullish crossover below the oversold level of 20%. If this occurs over the coming weeks, possibly as soon as the end of this week, it could signal a move to a secondary uptrend.

Soybeans (Old-crop Futures): The May contract closed at $9.42, down 4 cents for the week. The contract dipped below its previous low of $9.37 1/4 last week, hitting a new low of $9.36 1/2. While this would suggest the secondary (intermediate-term) downtrend is strengthening, weekly stochastics are already well below the oversold level of 20% and nearing a bullish crossover. Also, the contract's minor (short-term) trend has turned up on its daily chart with an initial upside target of $9.72 1/4.

Soybeans (New-crop Futures): The November 2017 contract closed at $9.49 1/2, down 4 1/2 cents for the week. The secondary (intermediate-term) trend looks to be nearing its end as the contract holds near support at $9.50, a price that marks the 50% retracement level of the previous uptrend from $8.57 through the high of $10.43. Weekly stochastics are below the oversold level of 20% and in position for a possible bullish crossover. Also, the contract's minor (short-term) trend has turned up with an initial target of $9.46. 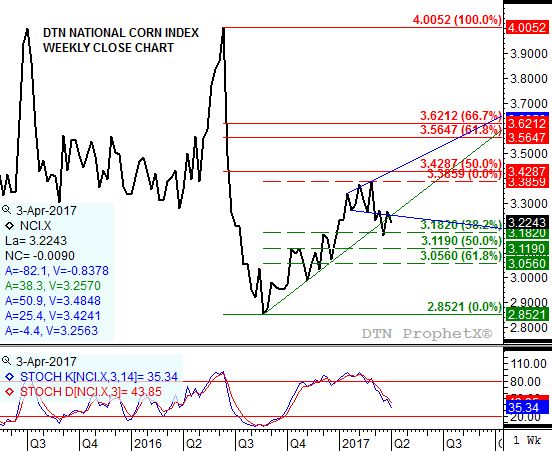