Another chapter in the saga that is the 2022-23 growing season in Argentina -- rain? After months of receiving no or disappointing amounts of rainfall in the country, models are pointing toward more beneficial rainfall to close out the month of January.

As noted in last week's blog (https://www.dtnpf.com/…), models had some chance for spotty showers this week but were a bit optimistic during the last full week of the month. Considering that is now next week, models can be a little more trustworthy.

A series of three fronts will move through during the next 10 days across the country's primary growing region, the Pampas -- an area that encompasses all or parts of the states of La Pampa, Buenos Aires, Santa Fe, Entre Rios and Cordoba.

Together, the Pampas produces roughly 80% of corn and soybeans in the country. Each of these fronts are forecast to receive roughly 25 to 50 millimeters (roughly 1 to 2 inches) of rain, though not all in the same areas. Together, the three fronts are forecast to produce roughly 50 to 100 mm (2 to 4 inches) of rain at a time when both corn and soybeans are in dire need.

A report released by the Buenos Aires Grain Exchange (BAGE) on Jan. 19 indicated that good ratings fell again for both corn and soybeans, now sitting at an abysmal 5% and 3%, respectively. What is worse is that the poor ratings have grown to 60% for soybeans, and remained at 47% for corn, both incredibly high numbers.

Some of the later-planted crops are still able to use the incoming precipitation. That would include most of the soybeans, which according to BAGE have not hit pod filling in a meaningful way yet, and only 36% of the crop has started blooming. It would also mean most of the second-phase corn that was planted since early December. This phase of corn planting accounts for about 60% of the total corn crop and is only starting to tassel at 9%. Though some damage and yield limitation has already been done, there is more of the crop that can make use of the incoming rain.

It is with the first-phase corn planting where this rain will likely have little to no impact. Due to limited planting in September and October, only 75% of the intended acreage was planted during that time, according to BAGE. Over 60% of that crop has reached the fill stage and some of it is reaching maturity. All the rain can do is stabilize the crop and keep yields from declining further.

The rain would still be able to help a good portion of the crop. The question is, will the rains come as forecast? All season, when models have forecast fronts to move through with good precipitation, the results have disappointed. Models can overestimate the amount of moisture available to create precipitation during droughts, as has been the case for Argentina this year.

Still, even if the rains come in with half of their forecast punch, the region looks at some pretty decent rains during the next 10 days. But, with drought incredibly deep and soil moisture nearly exhausted, it seems difficult to reason that even the rain as forecast would produce lasting improvements in crop condition. That is, unless it is followed by additional rains.

Longer-range versions of both the American and European models suggest some more decent rains could come in during the first half of February. Should those rains turn out as well, we could see at least some stabilization if not improvement in the crop conditions. But, with so much of the crop in dire straits, that may prove difficult to do even if the weather improves. 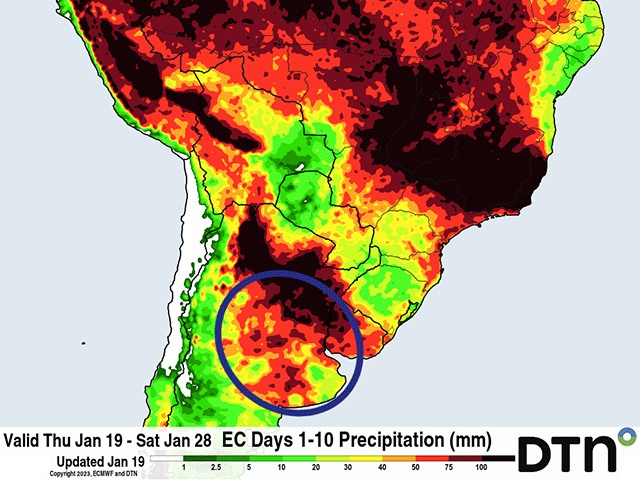