After a week or more of dryness, showers are moving back into Argentina and Brazil. But they are scattered, and will not hit all spots equally.

The dry period has been somewhat favorable to get the remaining seed in the ground in southern Brazil. In the state of Parana, which has had some limited fieldwork opportunities due to heavy rainfall, full-season corn is 93% planted while first-crop soybeans are 79% planted as of Nov. 7, according to the Department of Rural Economics in Parana. Despite the drier weather, good ratings sit at 85% for corn and 94% for soybeans. Of course, this early in the year, with ample soil moisture, that should be expected.

Farther north in Mato Grosso, planting of soybeans is nearly completed with 93.5% of the crop in the ground as of Nov. 4. That comes courtesy of the Mato Grosso Institute of Agricultural Economy. That planting pace is neck-and-neck with last year's rapid pace. While soil moisture is not as favorable in this state, most areas outside of the northeast are doing well. The wet season started on time, though it has come more in spurts than in regularity. Last week's sweeping cold front left the region dry for many days and temperatures returning up to the 30s Celsius (mid-80s to near 100 Fahrenheit) have likely sapped a little more out of the ground.

Down south in Argentina, despite some recent rains, the dryness during the last week returned a lot of the country to poor soil moisture conditions. Frosts also occurred behind that cold front that went through Brazil and likely damaged advanced wheat and some corn. Temperatures have creeped back up toward normal again this week, but all over this country, issues with drought have been ongoing.

According to the Buenos Aires Grain Exchange, wheat is in dire straits. As of Nov. 10, just 8% of the crop is listed as good or excellent condition and 57% is rated in poor or very poor condition. Private estimates for wheat production out of the country continue to decline and with more and more of the crop reaching maturity, late rains are unlikely to provide much assistance.

For corn, only 23% of the crop is planted, but roughly half of it should be on average. With the first phase of corn planting over as the country mostly takes a break during November before planting the second phase in December and early January, it may be a good thing that very little of the crop is being subjected to the harsh dryness and low temperatures. Still, frosts last week may have damaged some of the more advanced crop, which is starting to enter late vegetative stages. The drought is the bigger story though and only 9% of the crop is in good or excellent condition, contrasted with 34% in poor or very poor condition.

Rains are returning to both countries here. They started on Nov. 9 and will be filling in across both countries during the following day or two. Models are suggesting the showers will come in clusters, but be widespread. Estimates of 25 to 75 millimeters (1 to 3 inches) are fairly common across models going through Nov. 13-14 when a cold front will come sweeping through both Argentina and southern Brazil. That will leave the regions dry again through most of next week, though models disagree on how dry and for how long. Central Brazil is likely to continue with scattered showers next week, which will help to increase soil moisture in these areas. Either way, the rains will be very important, especially in Argentina where soil moisture is in worse shape.

While models do have widespread precipitation, they also suggest that it will come in clusters. Being in convective clusters, models typically do a poor job of gauging the coverage and intensity of such showers. In reality, they tend to be more isolated than models suggest, but also more intense. In other words, models have a tendency to spread precipitation out too far instead of concentrating it in smaller areas. If this trend holds, some areas are going to get really good rainfall. Amounts over 50 millimeters (2 inches) will go quite a way as long as runoff or flooding is not too much of a problem. But that also means that some areas are likely to get missed or receive less than what models are suggesting.

If that occurs in too many spots that are in dire need of precipitation, the effects of drought will only worsen. With Argentina in very deep drought, even the good rainfall that some areas see will not sustain the area for the rest of the season, especially with subsoil moisture at very low levels. The other 77% of the corn crop, and nearly all of the soybean crop is going to need a good base of moisture to germinate. And long-range models are still suggestive of drier conditions for both areas going into December.

For a more extended look at South American weather, join me at the 2022 DTN Virtual Ag Summit Dec. 12-13. Get all of the information you expect from DTN, from the comfort of your home or office. For details on the agenda and how to register, visit www.dtn.com/agsummit 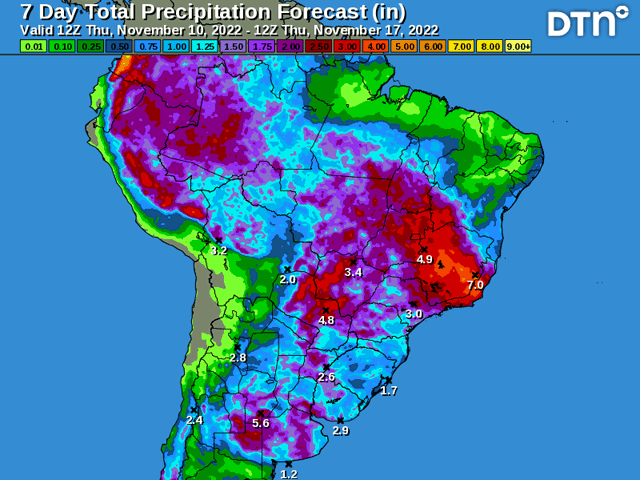