As expected, scattered showers went through both Argentina and southern Brazil late last week and weekend. Rainfall amounts were generally in the expected 25- to 75-millimeter (1- to 3-inch) range.

However, areas that were on the lower end of the spectrum were over some of the most important agricultural locations in Argentina, and the ones deepest in drought. Across the area that encompasses southeastern Cordoba, southern Santa Fe, and northwest Buenos Aires states, rainfall was generally kept to near that 25-mm mark. According to the USDA, those three states account for 72% of corn production and 78% of soybean production on an annual basis.

Of course, some areas of this region got the better rainfall amounts, but the drier section is the most heavy production area of corn and soybeans in these three states. And only small sections of these states recorded rainfall amounts greater than 50 mm (about 2 inches).

Therefore, it should come as no surprise that, according to the Buenos Aires Grain Exchange, crop conditions for corn had very little improvement during the prior week. Good-to-excellent corn ratings rose from 9% to 11%. Poor-to-very poor conditions fell from 34% to 28%. It is an improvement, but not drastic. Last year, good-to-excellent ratings were at 91%. Ratings have not yet been established for soybeans as that crop has just started to be planted.

Rains are not done for the year, but the drought is taking its toll. More showers are passing through these important growing areas through Nov. 20. But the coverage and intensity of these showers is not expected to be as great as the previous event last week.

Instead, rainfall amounts of 15 to 30 mm (0.6 to 1.2 inches) appears more likely, with some localized heavier amounts, mostly for southern Buenos Aires and not in the area with the deepest drought. Some areas are likely to be missed again, and very well could be the same area that needs it the most.

These showers are followed by another week of dryness as La Nina continues to have a strong influence on the weather patterns over Argentina. It is tough to be a farmer in Argentina these last three seasons under La Nina's control, as production has been flat over the last two years with lower-than-average yields. This third-straight La Nina year looks to continue that trend.

Of course, the hardest hit crop currently is the first phase of corn planting, which was planted in September and October. Usually accounting for about 40-45% of total corn plantings, this year it is far below that normal pace. The Buenos Aires Exchange estimates that corn plantings are at 23.6%. Analysts are projecting that producers have either switched to soybeans or are waiting until the second phase of planting begins in December. Soybean plantings have reached 12% complete and November is the primary month for planting soybeans.

With less crop in the ground affected by the drought, there is hope that increased rainfall during the coming weeks could turn the crop situation around. There is time, but the DTN forecast is not optimistic. And with La Nina likely to hold on until March or later before releasing its grip on the global weather patterns, the potential for improved yields and production is not very high.

For a more extended look at South American weather, join me at the 2022 DTN Virtual Ag Summit Dec. 12-13. Get all of the information you expect from DTN, from the comfort of your home or office. For details on the agenda and how to register, visit www.dtn.com/agsummit 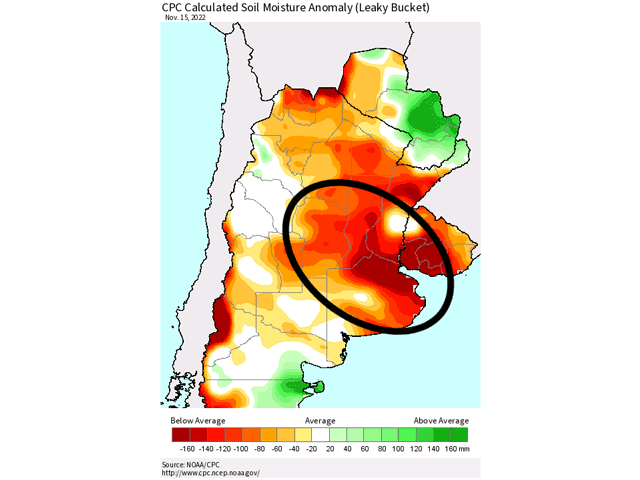