For southern Brazil, La Nina tends to create hotter and drier conditions in the spring and summer. It is not always the case, but that is the general tendency. Since this winter, however, rainfall has been regular and consistent, leading to above-normal amounts for most areas from the states of Mato Grosso do Sul and Sao Paulo down through most of Rio Grande do Sul. August and September have been particularly good months for precipitation, and that pattern is continuing through the first half of October as well.

Fronts moving through Argentina have been dry, but once they near or cross the border into Paraguay and Brazil, they have been lighting up with consistent rainfall. They were stalling in the region over the winter but are now progressing northward into central Brazil. But still, they are putting down consistently good amounts for this time of year.

A cold front is currently doing that here on Oct. 6. It produced some scattered light showers across Argentina, but the intensity is picking up as it is moving into Brazil. This front will not linger, and most of the showers will be gone by late in the day on Oct. 7. But another front is going to move through Argentina Oct. 7 and 8 and again will light up with showers as it crosses into Paraguay and southern Brazil Oct. 9. This front will be different from the first in that it will stall out. Scattered showers are expected to continue across most of Brazil through Oct. 15. The state of Rio Grande do Sul may not see the coverage or intensity of the showers that are seen farther north. But for the most part, rainfall over the next 10 days is going to be another good period. The European Centre for Medium-Range Weather Forecasting (ECMWF) is producing widespread rainfall amounts of 50 to 100 millimeters (about 2 to 4 inches) of rainfall through Oct. 15. Areas around the state of Parana are forecast to see amounts of 100 to 150 millimeters (about 4 to 6 inches) in the same period. The American Global Forecast System (GFS) has very similar amounts for southern Brazil, but a little more isolated in central Brazil. Still, that is hefty rain to begin a crop year.

The frequent rains have been filling soil columns, but for some areas, it has been a bit too much. There have been some reports of slower planting progress due to the heavier rain, and maturing wheat is dealing with some moisture problems affecting quality and harvest. But this sure beats the alternative and usual dry scenario seen from La Nina.

These superior conditions will not last forever, however. La Nina's influence may have taken a break for southern Brazil, but models are forecasting it to reclaim its typical tendencies for the second half of October. Longer-range versions of both the American GFS and ECMWF show holes of precipitation across southern Brazil right after our 10-day period. For the second half of October and through the end of their runs in early and mid-November, respectively, both models are predicting below-normal precipitation from Mato Grosso do Sul and Sao Paulo southward. Heavy rains have filled soils well to start off the season, but an extended dry period may not sustain crops if the rains cannot return in a more frequent manner. Looking further out, the DTN forecast for all of November and December is calling for below-normal precipitation. Temperatures may be milder compared to normal, but some of these areas' daily average highs get into the lower 30s Celsius (upper 80s Fahrenheit) through December, which would put undue stress on crops as they enter pollination. The season certainly has started off well, but that does not mean that the first corn and soybean crops are without weather risks. 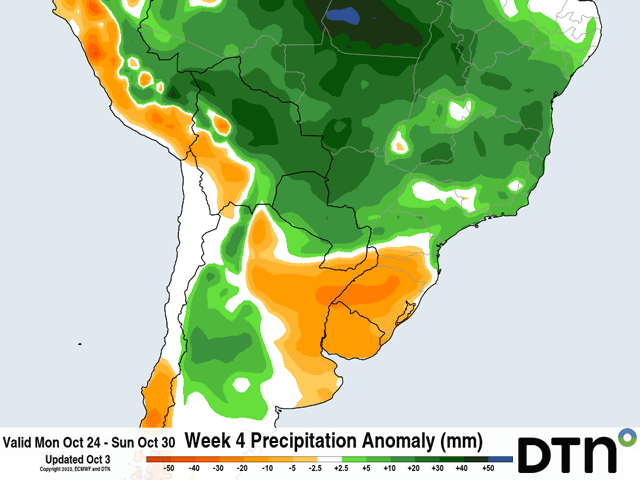