Argentina has had poor weather conditions for quite some time now. Dryness and bouts of cold over the winter into early spring have caused some wheat fields to be abandoned as reported by Reuters here: https://www.reuters.com/…. With conditions not expected to improve any time soon, more producers could face abandonment or poor yields.

These conditions have also been pushing back corn planting. Though the country is not out of the woods yet, bouts of frost are becoming less and less likely. Instead, it is the dryness that is most concerning. Soil moisture across the country is near the lowest in the last 30 years for much of the corn production areas. The state of Cordoba in central Argentina is the state most affected and also accounts for about a third of all corn production in Argentina.

The combination is a big concern when we factor in how tight corn supplies are around the world. As noted by DTN Lead Analyst Todd Hultman, "Total world ending stocks excluding China are the second-lowest in nine years. Argentina is the third-largest source of corn exports behind the U.S. and Brazil." After disappointing yields in the U.S. and drought in Europe, supply issues from Argentina would be another blow to food security for many countries. The world does not need another weather issue to restrict corn supplies.

Argentina plants their corn in two phases. The first phase is from September through October. The second phase is in December and January. With the incredibly dry soils now going into October, producers are going to have to make some tough decisions. They could plant their corn anyway and risk a drought-ravaged crop, shift more of their planting to the second-phase, or make a switch to planting soybeans. The third option could make for some big changes in the world output of both crops if it is done on a wide scale. But the first two options could be more intriguing.

Planting into dry soils and hoping for rain could result in poor stands if the rains do not show up. And all indications from models are that for the month of October, dry conditions are likely to persist. There is a cold front that will move through early next week, bringing a chance for scattered showers Oct. 4, but models have been backing off in recent days on how widespread and intense these showers will be. Amounts now forecast are likely to be less than 10 millimeters (0.40 inches) and not enough to get producers out to plant in any significant way. Afterward, the European model is very dry through the end of its regular run and continues the dryness through the bulk of October on its latest long-range run.

The American GFS model, on the other hand, does have some potential for showers Oct. 8-9. This is very far out and hard to trust but gives the region a chance. In its extended range, the American model is also relatively dry, though not as much as its European counterpart. Still, with the background drought and dryness, it is difficult to imagine the first phase of corn planting going well to set the crop up for good yields. With that in mind, producers may shift more of their planting to the second phase in the summer.

However, La Nina is still in play, at least for the beginning of the next calendar year. La Nina conditions typically lead to more heat and dryness for Argentina during the summer. That was a near-constant reminder last season and production estimates were cut as heat and dryness bit into yields.

This year, La Nina is expected to wane in the summertime, heading for neutral conditions in February or March. The atmosphere usually takes several weeks to adjust to the newer conditions, so La Nina-like weather patterns could continue for the rest of the summer. But during the fall, as late-planted corn is going through pollination and grain-fill, we could see a return to more normal conditions including less heat and more rain. Of course, this is no guarantee. Without La Nina to drive the weather patterns, other smaller forcing factors are going to be in play, which are hard to predict more than a couple weeks out.

The other concern will be for soybean planting, which typically occurs from mid-October through November. If rains do not return with enough regularity in October, that crop could also take a hit with dryness continuing into November.

John Baranick can be reached at john.baranick@dtn.co 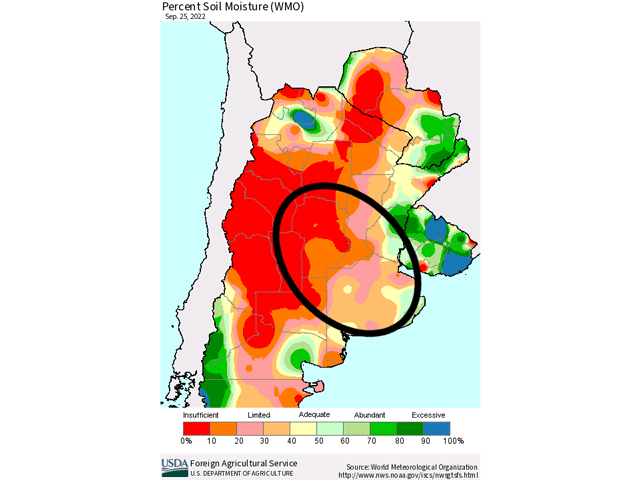