After a dismal 2020-21 safrinha (second-crop) corn campaign in Brazil last year, there was some optimism for a good season during the 2021-22 campaign. But the optimism is wearing thin.

Last year, the wet season started late, in mid-October of 2020. That is a typical feature of the wet season under La Nina conditions, which were in place for the Southern Hemisphere spring of late 2020. Producers were slow to plant their first-crop soybeans as they waited for favorable soil moisture. While Brazil caught good rains during the season for a record soybean crop, it made it difficult to harvest and plant the safrinha corn crop. Planting was delayed again, beyond the preferred February window in many cases. In April 2021, rains shut down rather dramatically and early, leaving much of the growing season to use subsoil moisture to finish out. While subsoils were full when the rains shut down in April, the crops did not respond well going through pollination and grain-fill on subsoil moisture alone. The drought that developed, along with a series of three frosts while corn was pollinating and filling, cut initial estimates of a good corn crop dramatically.

As seeds were being planted, production estimates from the USDA in February and March of 2021 were calling for a total of 109 million metric tons (mmt) of corn for Brazil. Good rainfall in the previous months and good-looking plants early in the season made for some rather high predictions. But estimates quickly plummeted as the drought laid in, and later when the frosts occurred.

As of the January 2022 USDA report, that number fell to just 87 mmt, or roughly a 20% drop from initial forecasts.

This season has played out much different in many regards, but we may again see high estimates plummeting as the season wears on. While La Nina conditions returned in spring 2021, the wet season started on time at the end of September. Producers in Brazil quickly jumped on the prospects for an on-time season and had one of their quickest soybean planting campaigns in recent years, a stark contrast from the previous year.

However, as the wet season in central Brazil brought consistently good rains, the reverse was true farther south. Southern Brazil endured consistent drought and soybean production fell harshly in some areas. What looked like a good soybean season at the start has generally fallen as more data has come in from the field. USDA estimates for soybean production in November 2021 called for a total of 144 mmt. That has fallen to 125 mmt as of April 2022.

The weather pattern set up central Brazil with good soil moisture as safrinha corn was being planted, while southern states from Mato Grosso do Sul down through Rio Grande do Sul were extremely dry. But going into late February and March, the situation essentially reversed. Rains returned to southern Brazil in earnest during planting, getting seeds off on a good footing. Meanwhile, showers became much more isolated in central Brazil. Safrinha corn planting ended early with most of the crop, an estimated 87% of it from the Mato Grosso Institute of Agricultural Economy (IMEA), being planted in the preferred planting window before the end of February.

With ample soil moisture, corn in this part of the country also developed quickly and with good health. But soils in Brazil do not hold water very well. With the showers becoming isolated, subsoil moisture has been declining since mid-March. As I have written previously, it is starting to become critical at the worst possible time.

The weather does not appear it is going to cooperate here for the rest of the season. A system is bringing scattered showers from south to north through Brazil this week. But showers will work into northern portions of the country by April 16 while dry conditions settle in behind them going through most of next week.

Long-range models and forecasts point to showers returning to southern areas, but central Brazil looks like it is having the last organized shower event of the season. With the typical end of the wet season around May 4, an end on April 16 would be more than two weeks early. Limited soil moisture during the last few weeks and very little rainfall from here on out should cause moisture stress to corn across the area of the country that accounts for 60% to 70% of safrinha corn production in Brazil. The timing could not be worse either, as the lack of soil moisture comes as the crop is going into pollination again.

Production estimates from both public and private entities are yet again very optimistic. The USDA increased its forecast for corn production in Brazil to 116 mmt in April 2022. Part of that was due to increased planting acreage, and another part was from a good start to the safrinha season.

However, with the coming weather conditions during the next few months, we may again see crop production falter through the end of the season. That is especially true if we see La Nina bringing early frosts back into the region as well.

La Nina has had some different impacts to crops between the 2020-21 and 2021-22 seasons, but an early end to the wet season is something similar. Whether or not southern growing areas can make up for some of the lost production that looks likely in central Brazil will be a good question that still needs answering. 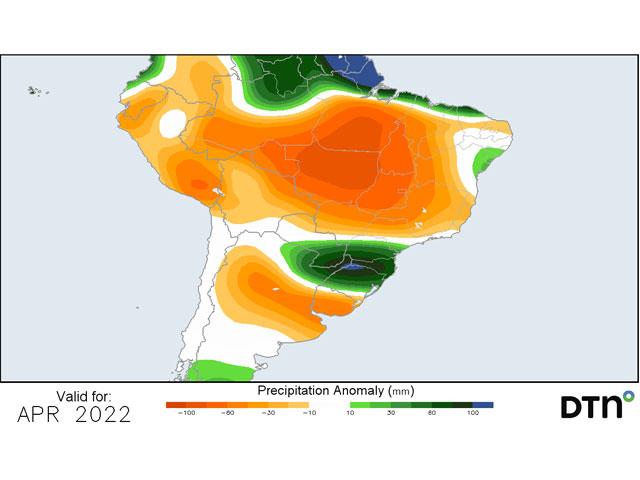