With the official declaration by the Australian Bureau of Meteorology on Nov. 23, we can officially and confidently declare La Nina is in effect in the Pacific Ocean. Of course, the United States declared this about a month ago, but with both centers on board, there is no denying what producers in South America had already feared and prepared for -- drier conditions in Argentina and southern Brazil.

The forecast for December continues to show that pattern as well.

We have already seen these conditions crop up this spring. It has not been consistent or regular, but overall, drier conditions have been in place for most of Argentina and southern Brazil since at least the middle of September. That is in spite of some good rainfall in November, at least for much of Argentina. Southern Brazil has fallen more into the expected drier pattern, recording roughly half of the normal rainfall in the state of Rio Grande do Sul, which has seen the worst of the conditions so far in the region.

But soil moisture was built up over a good portion of Argentina so far this month. It may not have been as much as we normally see in eastern areas such as Buenos Aires and Entre Rios, but northern and western sections of the country have been at or above normal this month.

Building up soil moisture is important at this point of the year because of the La Nina state. Typically, La Nina brings reduced overall rainfall, but only because systems quickly move through the region and leave behind drier conditions.

As long as the frequency of these fronts and systems comes with regularity, the overall drier conditions are not a huge concern with good soil moisture to carry through. However, if they are irregular, or only bring lighter, more isolated showers, deficits can cause much more stress and perhaps damage.

That is the true threat from La Nina -- that fronts will be irregular with inconsistent showers. Getting missed by one of the systems and having to wait sometimes two weeks between rainfall can really stress crops, and would be highly detrimental if they occur during pollination. That stage begins for some of the early-planted corn in December.

There are some good rains yet to finish out November, but models are not optimistic about rainfall to end the calendar year. Both the European and American models show good signals for reduced precipitation for almost all of Argentina's growing regions, as well as Rio Grande do Sul in southern Brazil. The American model is most extreme with deficits of 25 to 75 millimeters (roughly 1 to 3 inches) across the entire area.

The European model has a smaller area within this same region with those sorts of anomalies, but the signal is there on both models for reduced rainfall amounts. That still equates to 75 to 150 mm (roughly 3 to 6 inches) for the month, however. So, while rainfall will be reduced, it will still come as fronts move across the area. But there is less of a chance to see showers outside of those systems, and the speed of those systems is likely to be increased, not allowing rainfall to pile up. But again, if they come with regularity, the timing of the showers could be more important than the overall amounts.

The amounts will be more important for later-planted corn and soybeans, however. With roughly half of expected corn still yet to be planted in Argentina, and another 70% of soybeans, December is going to be very important for germination and early growth, as well as building reserves for the summer and fall pollination period. With drier weather likely to persist through the summer and fall seasons due to La Nina, concern will continue, and eyes will be on the regularity and coverage of showers as fronts move through over the coming months.

Get a full rundown on the 2022 outlook for weather affecting South American crop areas during the DTN Ag Summit, Dec. 5-7, in Chicago. Visit www.dtn.com/agsummit for more details about the summit and to register. Register before Nov. 26 for the early bird rate. 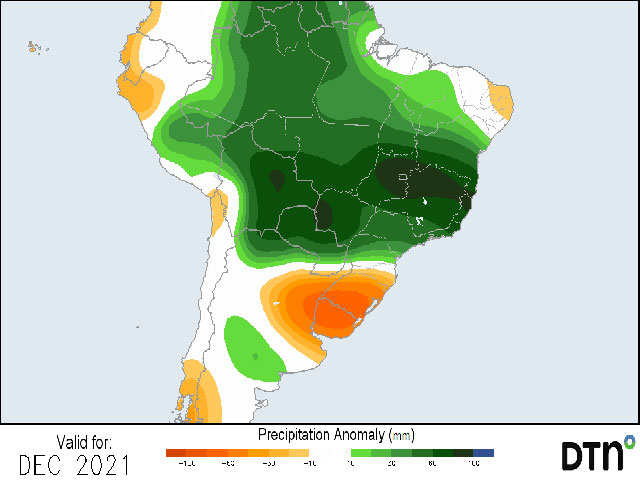