OMAHA (DTN) -- Tom Schwieterman, who grows 750 acres of corn and soybeans near Burkettsville, Ohio, said he had heard about the size of Brazilian soybean farms for years, but didn't understand it.

"You can look in any direction and see wide-open land and planted crops," Schwieterman said. "At home, every place you look you see a house, a barn, a silo. Out there, you just saw wide-open spaces. It's just baffling to see something that huge. It's actually bigger than I thought it would be."

DTN joined a tour of U.S. farmers through parts of Amazonia, Mato Grosso and Parana states in Brazil during the first two weeks in February. Farmers touring Mato Grosso and Parana repeatedly noted their soybean yields were lower than expected, but they had shifted to their second crop, which was either cotton or corn.

After a week touring around the state of Mato Grosso, Brazil, Schwieterman and other Midwest farmers said their eyes were opened to the scale of production, state of technology and the value of U.S. infrastructure at home.

Yaro Chmelar, a Washington, Iowa, farmer and former director for the Iowa Soybean Association, had been in Brazil in 2003 and recalls the expectations then to increase soybean production. "They don't care about out-producing the United States, but want to see everybody sell more to China and more to Europe, and that's what we need to do," Chmelar said.

Chmelar noted the efficiency of Brazilian farmers and their workers moving from harvest to planting a field. "They move quickly from soybeans to corn, or cotton, how they move from harvesting to replanting in 10 days, which we can't do," Chmelar said. "The equipment is humungous, just huge. I'm not a big farmer, but I'm just impressed with the equipment, and I'm also impressed with the people."

Bill Wehmeyer, a retired farmer from Flint Hill, Missouri, who farmed for 37 years in north-central Missouri, also said his immediate takeaway was the size of the farm areas. "I'm sure there are not that many areas of the world that have that much good farm land without some rough areas beside it," Wehmeyer said. "It's impressive. The roads, not so much."

Wehmeyer compared some of the roads to being a bit like "75 years ago in Missouri," given so many were unpaved stretches.

For the volume of product that Brazilian farmers move, Schwieterman was surprised at the lack of railroad crossing Mato Grosso to help more efficiently move commodities to port. "You would think somebody would catch on," Schwieterman said. "When you can pull 100 cars and not just two, it seems to me somebody is missing out on a good thing."

Bob Cook, a farmer from Elkhorn, Wisconsin, who farms continuous corn in the southeast part of the state, said infrastructure was actually better than he expected, noting the roads weren't great but passable. The lack of rail throughout most of Mato Grosso also leads to a vast trucking system that agriculture has created. "They have plenty of freight to move the crop," Cook said. "I always heard it was a seven-day turn to get to port and always wondered how you come up with enough trucks to do that. I got to see how they came up with enough trucks to do that."

Looking at the opportunity for younger farmers to come to Brazil, Cook said he doesn't think there is a huge benefit because quality land is a premium in both the U.S. and Brazil.

"I don't think it's a huge advantage," Cook said. "Probably the only benefit down here is they do have a barter system."

Brazilian farmers talked about the ability to pay for inputs and other products mainly by committing a volume of production to the seller. "All you have to do is worry about how many bags (bushels) per acre you are going to have to produce to cover your input costs," Cook said. "I see that as a huge advantage for someone who doesn't have any capital."

Cook credited Brazilian farmers for stewardship as the country has expanded production by having legal reserve requirements on farms, which vary from state to state and when farm ground was purchased.

"Being here gives me a whole perspective of what it really is," Cook said. "I couldn't wrap my head around it without being here."

The availability of more farmland is there under some scenarios. Native tribes own 1 million hectares (2.47 million acres) of prime ground in parts of Mato Grosso. Brazilian farm experts indicated the tribes are looking more seriously at revenue from putting that land into production.

John Takacs, a hay and straw farmer from Wellington, Ohio, said he got a different view of Brazilian agriculture after expecting to see older combines and technology in the fields. "It's the complete opposite. They are doing everything that we are doing. The organization, the size of the farms, it's all there."

Takacs was also surprised at the scope of the reserve acreage and the emphasis some farmers placed on sustainability practices. At least one farm provided a detailed explanation of its sustainability measures and the importance of those practices to selling soybeans and other commodities to Europe.

"They have some viewpoints that are ahead of us in many ways," Takacs said. "They were all talking about their carbon footprint. It seems like they are well into their sustainability focus." 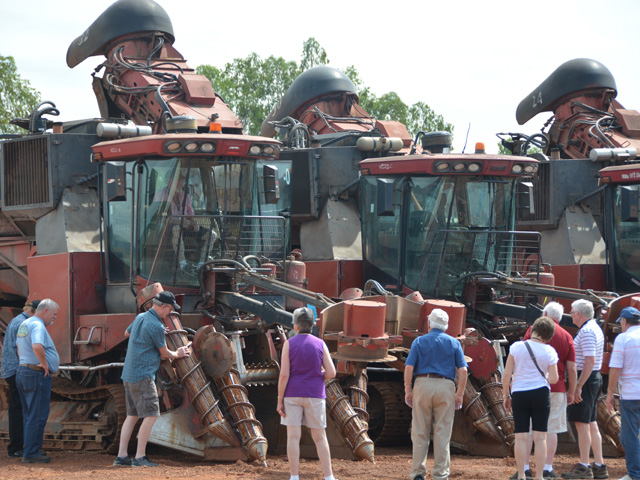