TANGARA, Brazil (DTN) -- A tour bus full of Americans bounces like a carnival ride traveling downhill, coming off a plateau on a narrow clay, unsurfaced and seemingly unmaintained road in the middle of a steady downpour while maneuvering around semi-trucks likely loaded with soybeans going the opposite direction.

It's just another afternoon during harvest in Mato Grosso in Brazil.

Mato Grosso has some farming advantages, such as its vast acreage -- the state is the size of Illinois, Indiana, Iowa, Minnesota, Nebraska and Ohio combined (with room to squeeze in Delaware and Rhode Island). Also, Mato Grosso farmers can grow soybeans in the rainy season, then plant a summer crop like corn, cotton or sunflowers.

Agriculture, after all, makes up 75% of the economy of Mato Grosso.

Nevertheless, the Achilles heel in Mato Grosso is infrastructure for all those crops and livestock. And, for all its size, Mato Grosso lacks people and overall tax base with a population of just 3.4 million, of which more than 600,000 live in and around the city of Cuiaba.

The Institute for Mato Grosso Economics of Agriculture (IMEA) projects it costs $80.51 a ton to get most soybeans and grains to port for farmers in the state. That equals roughly $2.20 for each bushel of beans.

Mato Grosso farmers take significant basis discounts because roughly 60% of Mato Grosso's soybeans, more than 700 million bushels, go direct to export at ports that can be 1,800 kilometers (1,118 miles) away. With the wait time at port, it's a seven-day round trip for each semi-load of beans, typically two 25-metric-ton trailers of beans, or roughly 1,836 bushels each trip.

"Freight is a challenge every year, and it takes up to 30% of our prices compared to the price at the port," said Ricardo Silva, a farmer near Tangara in south-central Mato Grosso.

Trucks hauling beans dominate the roadways. That gave truckers enough influence last year to halt traffic throughout the country last May and early June as truckers demanded higher pay to go along with higher diesel prices. Just as Brazilian farmers were getting more for their beans because the U.S-China dispute was heating up, the trucker strike took some of that away. While truckers are still waiting for legislation to confirm their gains from the successful strike, some of the largest commodity haulers such as Amaggi Group, Cargill and others started buying trucks and increasing company-owned trucking fleets. Amaggi ordered 300 new trucks in December.

Mato Grosso has one railroad that runs from Rondonopolis in the southeast corner of the state to the Santos Port at Sao Paulo. There are always discussions about carving out other major rail lines, and "planned" expansions show other future links to a major north-south rail line east of Mato Grosso owned by the mining company Vale SA, which runs to ports in both the Amazon to the north and in southern Brazil. Vale SA had been looking to run a rail line through Mato Grosso, but those plans are now likely derailed after a mining dam accident in December that will likely be costly for the mining company financially.

The Brazilian government also has been working for years to build a 1,100-km (683-mile) railroad, Ferrograo, which would run from Mato Grosso to the Miritituba Port in Para State on the Tapajos River. Both a group of U.S. and Brazilian agribusinesses were bidding for the project, estimated to cost $4.3 billion, as were state-owned Chinese firms. Reuters reported last month that the Brazilian government wants to have the Ferrograo railroad bid out late this year or early 2020. It will take at least 10 years to build.

Antonio Cesar Brolio, president of the Rural Syndicate, a Farm Bureau-type organization in Brazil, in Campo Novo de Parecis expressed disappointment in the Mato Grosso state government over its lack of action on infrastructure. The state implemented a tax on farmers specifically for infrastructure improvement, but then the state government diverts roughly 30% of the revenues to deal with other funding issues outside of infrastructure. The tax revenue also goes up with higher production.

"We would like to see the money we are paying the tax used for infrastructure as was promised in the beginning," Brolio said.

Silva added, "We have some anger at the state government but (are) confident the federal government will focus on infrastructure."

BR 163 is the main north-south highway splitting Mato Grosso, but even it has areas that need completing to connect the state's trucking system. Earlier this month, the new minister of infrastructure emphasized that the new government under President Jair Bolsonaro will finish a 50-km (31-mile) stretch of Highway BR 163 from Sinop, Mato Grosso, to Miritituba Port, by the Tapajos River. It is sometimes called the Itaituba Port, a city on the other side of the Tapajos River, but it is the same port.

"Last week, the new minister of infrastructure -- he's a guy we know from Mato Grosso and he knows what he's doing -- he rode in a truck and said he would have the army pave the last 50 km this year," Silva said. "That is the promise of this new government and we are very confident."

Farmers in other parts of Brazil may not have the scale of production they do in Mato Grosso, but they do not bear as much of the transportation cost. Domingos Trevisan, who manages a 1,768-hectare (4,367-acre) farm near Itaipulandia in Parana state, told DTN that buyers come to his farm to pick up soybeans and corn that typically goes to port about 700 km away. His basis, though, is narrower, normally running about 10% to 15% under the prices on the Chicago Mercantile Exchange for the front month. Parana, with a larger population base and tourism, also has a more modern overall road system than much of Mato Grosso.

"We don't have the kind of road issues they have in Mato Grosso," Trevisan said.

Mike Steenhoek, executive director of the Iowa-based Soybean Transportation Coalition, noted Brazil has a long track record of intentions not becoming outcomes. But it's apparent if Brazil wants to give a shot of economic boost to the rural areas of their country, the odds of success with infrastructure are high if Mato Grosso farmers can be linked to more ports.

"All they have to do is make progress and our competitive advantage starts to erode," Steenhoek said. 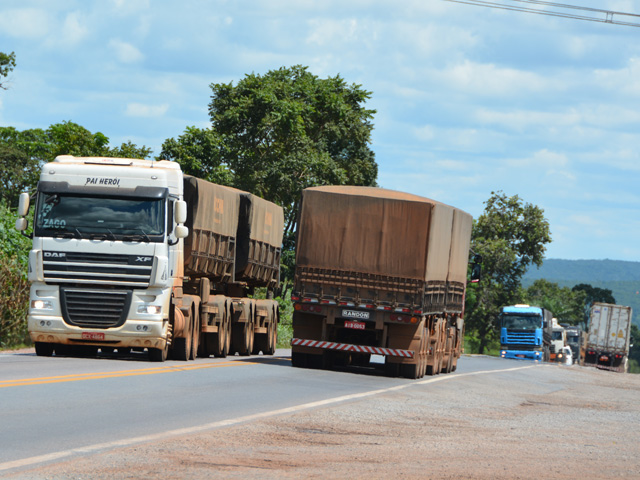