In a simple survey on a conference with more than 160 Mato Grosso farmers in Cuiaba, DTN found that most of the farmers believe their soybean crops are better than last year. Mato Grosso is generally responsible for about one-third of Brazil's entire soybean crop.

"We started planting in Sept. 25, with a little dry, and completed in Nov. 5, 40 days in the process, with some stops when weather didn't allow (planting). Now, we are waiting for the first harvest on Jan. 20, 2018," said Amarildo Crystofoli, a farmer in Diamantino, 100 miles north of Cuiaba, the capital of Mato Grosso state.

Brazilian farmers measure their yield in bags per hectare. Each bag weighs 60 kilograms (132.3 pounds). Each bag equates to 2.2 bushels of soybeans.

Crystofoli added, "Some of the fields were harvested at more than 75 bags per hectare (66.9 bushels per acre) last year. So we have a potential of a yield increase."

"Farming technologies, new seed varieties, and cooperative weather are all key to good crops. Of course, we farmers try to do everything right, such as planting in the right season and planting the right population of plants," Crystofoli said.

"These soybeans are the new Monsanto Intacta RR2 Pro variety. This variety is better than the old variety we were using several years ago that helped our production," said Crystofoli, looking at one piece of his soybean crop of 12,000 acres.

There are four things farmers are paying attention to in the production season for disease and pests: Asian rust, anthracnosis, stink bugs and caterpillars. But, so far, everything is under control.

"We had sprayed twice already with our nine John Deere sprayers, all fungicide for Asian rust. Now we are ready for the next spray." Crystofoli hired an aerial applicator to spray for the next day because of the high soil moisture after the rain. "From last Saturday to Monday, we received more than 200 millimeters of rain (7.9 inches)." Crystofoli said that more sunshine may help the soybean crop, because there was too much rain this year.

Other areas in Brazil are also in a good condition, except the state of Rio Grande Do Sul in the south of the country, which needs more rain. Markets were watching Bahia state early in the season because of less rain during planting, but now things look much better than expected. "After three years suffering with irregular rain seasons, Bahia producers have a reason to celebrate this 2017/18 crop," said Thiago Piccinin, "On the recent John Deere convention that took place in Nassau in Bahamas, the message was of an overall belief of an amazing season when it comes to yields. This perspective extends to all the Matopiba region (abstract of the names of four states in the northeast area, Brazil's new frontier of soybean production). Minas Gerais and Goias states are also on the map for regular rain coverage." Piccinin is CEO of Lotus Grain and Oil, a trading company in Sao Paulo.

Piccinin said that the only state demanding more attention up to now is Rio Grande Do Sul. The state is facing some of the same weather conditions as Argentina. "(It's) a bit early to make any definitive statements, but we definitely raise a yellow flag." 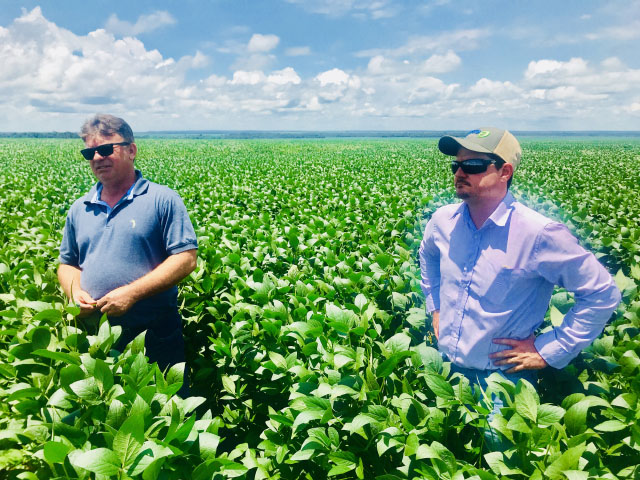