"A blizzard is the only thing this crop hasn't seen. It's been through severe drought, wind, frost, more wind and hail. I figured I'd just serve up the only thing I could think of that could possibly be left," said the Litchfield, Nebraska, farmer.

The June 6 and 7 hail event that plummeted Zoerb's fields is just a sampling of the nearly 271 hail events the National Weather Service has recorded in Nebraska as of June 14. The state ranks second this year behind Texas in recorded hail events. Another crop-shredding icy storm tore through the state on June 14 and 15.

DTN editors Elaine Shein and Dan Miller traveled some of the area that took the second pounding. Find a report of what they saw here: https://www.dtnpf.com/….

To say it's been one hail of a year so far is an understatement. Nebraska isn't the only state that has endured losses from hail this season.

Still, in his nearly 40-year career in farming, Zoerb has never seen anything quite like the icy wrath he endured on June 6. The family has fields scattered over 30 miles, and every field had damage. Every. Field.

Some of the hail was the size of golf balls with jagged edges. DTN Ag Meteorologist John Baranick only nods in sympathy when he hears this description.

"With stronger updrafts and perfect temperatures, hailstones persist in the cloud for a longer period of time, gaining size. These hailstones can fuse together to form the large ones. Fused hailstones typically have an unusual shape that looks more like a spikey ball as opposed to smaller hail, which is typically fairly round," Baranick said.

Kevin Harsch caught the tail end of the same June 6 storm where he farms near Wood River, Nebraska. Hail ground corn plants down to nubbins and soybeans to sticks. Corn fared better than soybeans, though, Harsch said.

A week after the storm, he could see corn coming back in some fields, but stands were compromised. Splitting stems revealed some bacterial disease was infiltrating from rain splashing up into the damaged areas.

"With final populations of 15,000 to 18,000 irrigated, what do you do?" he asked followers on Twitter. Farmers far and wide filed responses, but they don't have to look at that crop for the rest of the season.

"There are some real differences in viability in the beans by variety," he noted. "We can see it to the row." Soybeans can withstand a lot, but some fields were reduced to stands of 20,000 plants per acre. He ended up planting about 325 acres of soybeans to replant and 350 acres of corn.

"Mother Nature is mad about something. We've taken some real hits," Harsch said. At some point in the season, you just have to hold your nose and say this stinks and we'll have to live with what is left."

In her blog this week, University of Nebraska Extension educator Jennifer Rees gives a nod to the optimistic spirit of farmers. She discusses how some farmers are shredding the old crop to replant. Others were planting between rows and cultivating the old row out. Some are chemically terminating.

Rees discusses the bacterial top rot that sets into plants after they've been damaged. Her blog has recovery photos and a chart to help with replant decisions. Find it here: https://jenreesources.com/….

As the window was closing on corn planting this week, other farmers are looking at planting soybeans or other crops. What herbicides had previously been applied to those fields makes a difference on what comes next. Rees strongly suggested hand planting some soybean, milo or cover crop seeds into cornfields at a few different depths in the field to get an idea of whether the subsequent crop will survive.

The University of Nebraska has an impressive number of resources on how to navigate hail decisions at their Hail Know website: https://cropwatch.unl.edu/….

Hail this time of year is hard, but at least the calendar is still allowing some decisions, Harsch said.

"Replant is what we do -- as long as we can logically do it," he said. Getting seed is always a consideration when damage is so widespread.

The hot, dry long-range forecast is also a concern for that new, young crop. Baranick noted that while there could obviously be some variation, the overall weather theme should call for above-normal temperatures and below-normal rainfall. "The pattern is shaping up to make for hot and dry conditions. That does not mean that it won't rain or temperatures will be oppressive for the rest of the summer. But when you add it all up, it should turn out to be hotter and drier than average. For those that need to replant, it could be a really tough road ahead," he said.

Irrigation can be a blessing, Harsch said, but it is no substitute for real rain. He also observed that the storms tossed irrigation units around like toothpicks in some areas. Supply chain issues could make for longer and more costly repair scenarios, which adds layers of concerns to those hot, dry weather predictions for farmers.

This will be the third time Zoerb and his son, Ethan, have planted some soybean fields. They lost several soybean fields to frost and freeze damage earlier in the season.

"This year has to be one of the most exhausting of my career," Zoerb said, who has been farming since the early '80s.

The stressful conditions started with drought and high winds that sent corn residue flying over the winter. Trash that got into the row exacerbated freeze damage on plants that were next to it -- wicking the cold right into the nearby plant.

"This was the worst planting conditions I've ever seen because of drought. We ran pivots before and after planting to get the crop up. Then we got delayed by a small rain. Then came winds and freeze. Now hail.

"We have vehicle and building windows broken. There's probably not a roof on the farm or in this area that doesn't need replaced. Metal buildings are dented," he said.

Still, the planter went back to the field to try again, but not before he drank the ice cream blizzard.

Pamela Smith can be reached by Pamela.smith@dtn.com 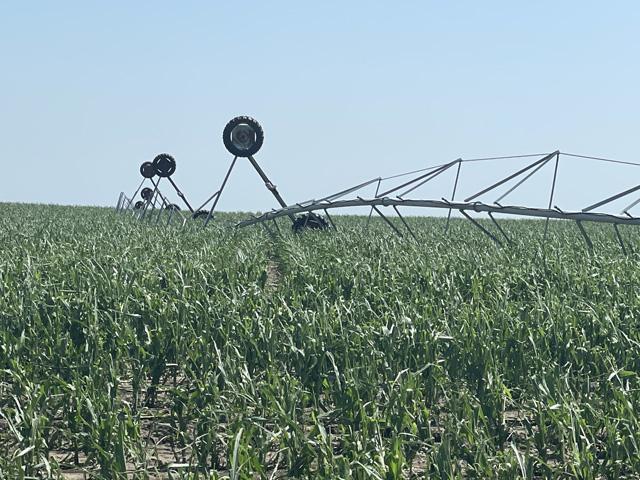