The last time Brood X cicadas saw the light, George W. Bush was campaigning for his second term. Ann Veneman was Secretary of Agriculture. Corn was headed below $2.

The periodical cicadas due to arrive in May in portions of 14 eastern states and the District of Columbia (D.C.) have spent the past 17 years growing up underground, sucking on tree roots waiting to emerge as lovesick teenagers.

Like some shrill winged boy band, the males will soon start singing to attract females for a mass mating event. The only mind-altering substance required for this insect reenactment of Woodstock may be aspirin (or a non-steroidal equivalent) for the humans who endure the month-long cacophony.

Actually, some earplugs might be helpful too, because it turns out you are needed in the choir of volunteers to document this next round of cicada chaos. Farmers by the very nature of their occupation have scouting skills that could be helpful in a citizen science effort to map the emergence, noted Gene Kritsky, a scientist who has studied periodical cicadas for 45 years.

Pitching in to help is as easy as downloading a free app called Cicada Safari from Apple or Google Play. Simply photograph the cicada with your phone and submit to cicadasafari.org, a site also filled with fascinating facts about these fascinating critters.

NO THREAT TO FIELDS

Periodical cicadas belong to the order, Hemiptera, which includes some irritating agricultural pests such as stink bugs and aphids. The good news is farm fields aren't vulnerable to cicadas, said Kritsky, who has agricultural roots in North Dakota and Illinois and now is Dean of the School of Behavioral and Natural Sciences at Mount St. Joseph University in Cincinnati, Ohio.

After all their fooling around, cicadas lay their eggs in ends of tree branches, which does occasionally cause the leaves at the end of the branch to die in a process called "flagging."

"There is a slight risk of damage to very young trees," Kritsky said. So, he recommends waiting to plant trees of 5 feet or under until the cicada event has subsided around late June.

"For the most part, there's little other risk with this insect," he added. "In fact, in 1869, a number of farmers reported greater yields in their orchards the year following flagging. The egg laying turned out to provide a natural pruning that resulted in greater fruit production," Kritsky said.

Yes, you read that year correctly -- 1869. Historical accounts of cicadas have been documented for centuries. Kritsky published a book this year called "Periodical Cicadas: The Brood X Edition". In it, he called cicadas "bugs of history" and references the writings of William Bradford, the second Governor of Plymouth Colony, around 1634, just 14 years after the arrival of the Mayflower.

Bradford wrote of "a quantity of a great sort of flies like for bigness to wasps or bumblebees, which come out of holes in the ground and replenished the woods, and ate green things, and made such a constant yelling noise as made all the woods ring of them, and ready to deaf the hearers."

Brood X (10) is the most widely distributed of the 17-year-broods and includes three species that arise together throughout parts of the eastern-central U.S. There are 11 additional 17-year broods plus three 13-year broods of periodical cicadas that also occur in the eastern United States.

By now you may be asking what's the big deal because, well ... don't cicadas show up every year? Yep, there are also annual cicadas that obviously spend much less time beneath ground. The other big difference is the periodical cicada has bright red eyes and is smaller than the annual cicada.

The good news for legions of pranksters is all cicadas shed their nymphal skin. That brown shell that has long been used to tease those with an insect phobia always seem to be in ready supply.

Kritsky's book takes readers to the beginning of the Brood X recorded U.S. history in 1715. A Reverend Andreas Sandel described their arrival in Philadelphia and noted that the English call them locust -- a clue as to why cicadas are sometimes misidentified or perhaps linked to Biblical insect invasions. Locusts are a type of grasshopper.

Sandel also writes about swine and poultry eating cicadas. Kritsky said dogs, cats, birds and other predators find the cicada quite tasty. In fact, there's a long-held premise that their mass arrival is an evolutionary strategy to ensure that enough offspring survive to carry on the species.

One reason Kritsky and other scientists want you to snap photos of these red-eyed buggers is there's a need to document whether cicadas are emerging, or if they still exist in areas previously reported or if changes in climate are causing cicada confusion. Submitted photos are verified by parataxonomists and uploaded to map, allowing users to follow the emergence as it happens. Videos clips (10-second) of chorusing cicadas can also be submitted. The calling cicada species can be identified by their calls.

Recent discoveries of misidentified broods in Ohio and Kentucky, along with two previously unknown populations of cicadas is an indication of how citizen eyes and ears can help scientists, Kritsky noted.

"Even though cicadas have been studied going back three centuries, there's still lots of new stuff to find out," he noted.

And, if you are hesitating about joining in the hunt, keep in mind the next time you'll have a chance to see Brood X will be 2038.

Cicada Safari supports the photography app, has activities for kids and almost as much information as there are cicadas: www.cicadasafari.org

Information on all cicadas worldwide: www.cicadamania.com

Previous Post (Get Wings: Plant Milkweed)
Next Post (Lessons From a Crop Tour: People and Experiences Matter. Social Media Does Not.) 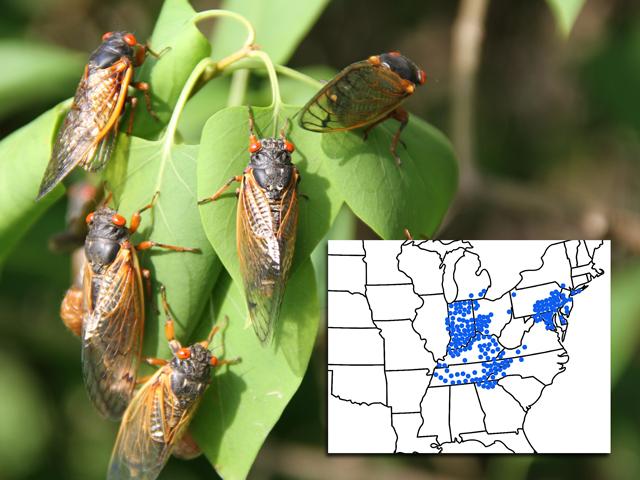