DECATUR, Ill. (DTN) -- Sunflowers are big rays of happiness and I've always believed it was in part because they turn their face toward the sun.

Now plant biologists at the University of California-Davis, say that's at least partially a rural myth. It's true that when you see a field of cultivated sunflowers, the flowers mostly face in the same direction. However, take a look at a field of flowered heads and you'll find they consistently face east, where the sun also rises each morning.

It turns out once sunflowers mature or put on their showy flowers, they head east and stay put. Stacey Harmer, plant biologist and the senior author on a paper published last week in the journal Science, used an infrared camera to measure flowers and found east-facing sunflowers heat up more quickly in the morning and attracted five times as many pollinating insects. "Bees like warm flowers," Harmer said in a university news release on the topic.

Field bees orient themselves with the sun and tend to fly from mid-morning to mid-afternoon. Seasoned beekeepers have told me it is important to work with these early morning tendencies so bees don't sign up for a late shift and get in the habit of working early. Sunflowers apparently got that memo.

Prior to blooming, sunflowers begin the day with their heads facing east, swing west through the day and turn back to the east at night. "The plant anticipates the timing and the direction of dawn, and to me that looks like a reason to have a connection between the clock and the growth pathway," Harmer said. This behavior of sunflowers had been described by scientists long ago, but had not previously been associated with circadian rhythms.

When plants were tracking the sun, the scientists also found the east side of the stem grew more rapidly than the west side. At night, the west side grew faster as the stem swung the other way. A number of genes were expressed at higher levels on the sunward side of the plant during the day, or on the other side at night.

Harmer said in the release that there appear to be two growth mechanisms at work in the sunflower stem. The first sets a basic rate of growth for the plant, based on available light. The second, controlled by the circadian clock and influenced by the direction of light, causes the stem to grow more on one side than another, and therefore sway east to west during the day.

As the sunflower matures and the flower opens up, overall growth slows down, and the plant stops moving during the day and settles down to face east. The circadian clock ensures that the plant reacts more strongly to light early in the morning than in the afternoon or evening.

I'm sure all this work has deep meaning to science. Harmer's lab apparently has discovered links between "clock" genes and the plant hormone auxin, which regulates growth. Auxin herbicides probably play into this discussion somewhere.

For now, I'm just happy to know the truth and learning about it has gotten me into the garden earlier each morning to realize my sunflowers are tackling their jobs like clockwork.

Additional co-authors on the paper are Nicky Creux at UC Davis, and Evan Brown and Austin Garner at the University of Virginia. Find it here: http://bit.ly/… 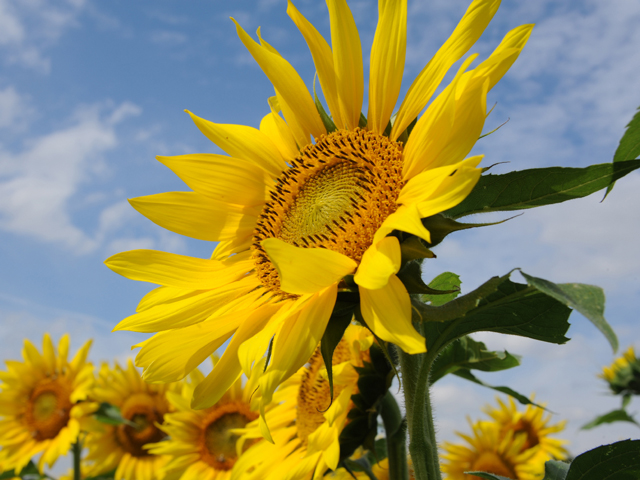