DECATUR, Ill. (DTN) -- Any kid ever armed with a shovel and enough dirt has probably been asked if they were digging to China. The cliche itself is a big whopper because one look at a map shows rooting to the other side of the earth is more likely to leave you bobbing in the Indian Ocean rather than coming to ground in China.

It took Paul Schickler's observation that Beijing and Des Moines, Iowa, are on nearly the same latitude for me to draw a geographical metaphor that this is just one more of the many things we assume or don't understand about China.

It should come as no surprise that Schickler, the president of DuPont Pioneer, looks for the parallels for corn production. Pioneer is one of many agricultural companies that have been working to put down roots in this country where the population has outdistanced the amount of land available to feed it. The Chinese government has made no secret that their current directive is to modernize their agriculture. Exploring how companies are doing that was my assignment as part of the DTN series of articles we ran last week.

Schickler likes to describe China's capabilities in the world of corn in terms we can grasp. The spring corn market in China is where they plant corn after winter wheat, much like U.S. regions that can grow double-crop soybeans -- Kentucky, Missouri and Tennessee, for example. The summer corn region is more like the Corn Belt I-states. The sub-tropical region behaves more like Mississippi and Georgia.

That kind of talk makes me realize how much China has changed since I visited nearly 15 years ago. I toured parts of the country with farmers and ag industry as part of the 2002 Illinois Agricultural Leadership Program (www.agleadership.org). The seeds of corn production were just starting to be planted then. The day we were to visit a crop farm, our groups was rerouted to a state-run museum, despite our polite protests that farms were what we had come all these miles to see. We were "allowed" to visit a modern greenhouse filled with tomatoes. We saw the early efforts to raise pigs and lambs in confinement settings. I left with more agricultural questions than answers.

Instead, it is other impressions of the country that have remained the most enduring for me. The billboards lining the highways featured Western faces. Advertisements for simple things, such as diapers, mimicked the babies we would see at home.

There was the lack of birds. You don't realize how noisy birds are until they are absent. Mao Zedong's campaign against the 'Four Pests' initiated in 1958 included orders to exterminate sparrows because they ate grain and robbed people of their labor. Ultimately, the consequences of eliminating birds that eat insects that eat crops were realized and reversed, but bird populations had not yet recovered. We saw only a few scraggly sparrows being barbequed in a Beijing food stand and a few shorebirds near Dalian, China's northernmost warm water port at the tip of the Liaodong Peninsula.

I also remember the high-rise apartments that sat empty and waiting -- built, we were told, to house a vast migration of people that would move from rural to urban sectors. BASF's Mark Shillingford, who lives in China, told me during an interview, that most of those buildings are now full.

Rural-urban migration and growth in nonfarm employment opportunities have reduced the share of China's population living on farms. Estimates of China's farm population vary widely, but the latest FAO estimates farmers now make up 43% of the country's population, compared to over 63% in 2000. All indications point to a further shift from rural to urban. That means more people are buying their food instead of growing it themselves and even more reason for modernizing their agriculture.

For several years, China has been strongly supporting corn production through subsidies, high guaranteed procurement prices and large government purchases. As was noted in a recent Foreign Agriculture Service (FAS) report, those measures made growing corn more lucrative than soybeans, cotton and many other crops.

That rapid expansion in sown area and rising yield over the past decade have led to successive bumper crops and the accumulation of stocks, the report noted. The Chinese government recently reduced the procurement price for the 2015/16 crop by about 10%. There's been a lot of speculation that might shift acreage to alternative crops (including edible soybeans, potatoes, silage corn and spring wheat).

American farmers know these swings in fortunes as well. With modernization and globalization come new economic realities and politics to play. However, the Chinese still have huge social issues to resolve. Fred Gale, USDA Economic Research Service senior economist, China team, told me lack of investment is a weak link in the plan. Bankers are reluctant to invest in the land when there is no clear ownership.

"The government is working hard to promote rural investment," Gale wrote in a fascinating look at developments in the country. Read it here: http://s.nikkei.com/…. "The new five-year plan calls for loan guarantees, arm-twisting companies and banks to invest in farming, experiments with rural savings and loan banks and spending billions on irrigation networks and upgrades of low-yielding fields. Officials want to earmark farm subsidy payments for soil fertility improvements and on-farm grain storage bins. Restrictions on farmland use are being loosened to allow farmers to build grain drying facilities and sheds where they can park their tractors," he said. However, Gale also talks about the potential for corruption that exists.

Gale further observed that Chinese officials -- like most who don't understand agriculture -- take for granted the massive investments made by farmers in developed countries. The more I dig into what people think about what is happening in China today, the more questions came to the surface. That's no surprise, but as China investments start to flow into our agriculture system, we should keep asking the hard questions and not just assume we know where it's all going to end. 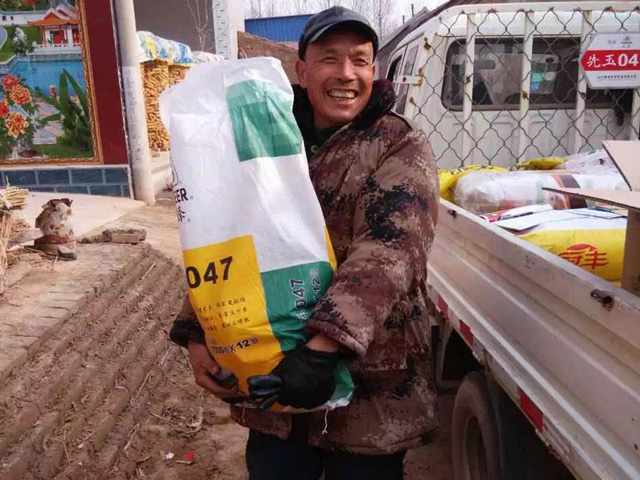