Cash corn prices hit $8 or higher in 205 places on the DTN National Corn Index spot bid map. Basis levels in the corn-needy areas of the United States have remained strong, as the short supply of old-crop corn is in a tug of war between ethanol plants and feeders, and recently the Gulf.

"I think one thing to keep in mind is that both southwestern Kansas and especially the Texas panhandle are corn-deficit areas that pull corn in from other states, too," said DTN Senior Analyst Dana Mantini.

It is unclear how much the current outbreak of highly pathogenic avian influenza will affect the feed market. (https://www.dtnpf.com/…)

Cash corn prices in some areas are being affected by current rail logistic problems and high freight costs. Normally, cash prices, mainly basis, would be lower if freight costs rose, but given the strong demand and needs of end-users, that currently isn't the case.

In the April 8 USDA report, USDA estimated U.S. 2021-22 ending stocks at 1.44 billion bushels. While that report was bearish for corn, the market has continued to rally as uncertainty remains on if and how much corn will get planted in Ukraine as the war rages on.

Spring planting in the U.S. Northern Plains and Upper Midwest has stalled as 10-plus inches of snow -- and in some spots over 2 feet -- has fallen this week there. High winds and low temperatures are also challenging the northern Corn Belt today.

The announcement Tuesday from President Joe Biden that sales of E15 will be allowed to continue this summer did perk up cash corn and ethanol prices. DTN Lead Analyst Todd Hultman said, "Wednesday's Energy Information Administration report of lower inventory from the Energy Department also suggested improved demand for ethanol, a modestly bullish surprise at a time when fuel prices, in general, are high."

Hultman added, "Even before this week's announcement, E15 sales would be permitted through the summer, ethanol margins were already profitable for plants, reflecting the need for more ethanol to help stretch low fuel supplies. U.S. ethanol production in 2021-22 is running 10% above the previous year's level, and ethanol plants have been strong bidders of corn across the Midwest. DTN's National Corn Index closed at $7.62 on Wednesday evening, the highest national average since 2012.

"In addition, end-users have likely become more concerned about securing supplies, anticipating a lack of exports from Ukraine in 2022 and anticipating the possibility of USDA's planting estimate of 89.5 million acres, the lowest in five years. Corn bids are especially high in the southwestern Plains where drought is prevalent and hay supplies are short. On top of all that, Brazil's second corn crop is just getting started, and it is not clear if central Brazil will receive adequate moisture in the weeks ahead," Hultman said. 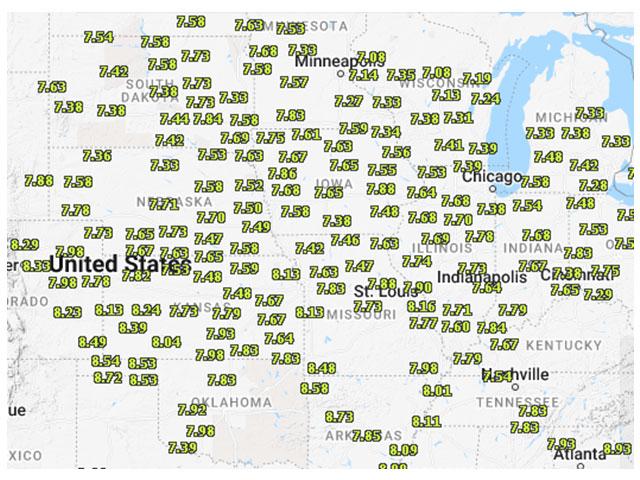