On Dec. 19, 2021, the Maria G, filled with grain from the CHS terminal in Superior, Wisconsin, became the last saltie to depart from the Port of Duluth-Superior, officially ending the grain shipping season. Since that time and up until Jan. 17, 2022, when the last ship arrived, lakers moved along the Great Lakes from the Port of Duluth-Superior with loads of coal and iron ore. The final vessel to leave the port was the Arthur M. Anderson on Jan. 14, loaded with iron ore.

"There are five ships wintering in the Port of Duluth-Superior this year, which is one more than last year," said Jayson Hron, director of communication and marketing, Duluth Seaway Port Authority. "Winter layup is an especially busy time for skilled tradespeople throughout the Twin Ports and the Great Lakes, who perform millions of dollars in crucial maintenance work on the U.S.-flag lakers.

"Engine work comprises a large portion of the winter work program. Some vessels have power plants capable of generating nearly 20,000 horsepower, and over the course of the season, a vessel can travel more than 70,000 miles. Engine parts need to be re-machined and re-installed so that ships can again operate almost continuously in 2022. Beyond engine maintenance, other winter work can include installation of new navigation equipment (e.g., state-of-the-art radar systems), steel replacement, hull inspections, upgrades to living quarters and galleys, etc."

Hron added that, "With the Soo Locks now closed for the winter, the port will tabulate its final tonnage numbers for the 2021 season, which are expected to eclipse the pandemic-plagued 2020 totals by nearly 30%."

On Jan. 15, the Soo Locks in Sault Ste. Marie, Michigan, closed to marine traffic and are scheduled to reopen March 25. That closing date is set by a federal regulation, and the other ports on the Great Lakes usually close within that timeframe depending on ice conditions.

Every year, the U.S. Corps of Engineers (USACE) uses the winter period to perform maintenance to keep the Soo Locks operating. The Detroit District team works long hours in extreme conditions to complete a significant amount of maintenance during this annual closure period. The work they perform is unique, especially given the harsh northern Michigan conditions they work in, noted the USACE.

The USACE Detroit District received $561 million in fiscal year 2022 of Infrastructure Investment and Jobs Act (IIJA) and Disaster Relief Supplemental Appropriations Act (DRSAA) for work in Michigan and on the Great Lakes, noted USACE in Jan. 19 news release. The IIJA was passed by the U.S. House of Representatives, and President Joe Biden signed it into law in November. USACE submitted a detailed spending plan to Congress as required by Jan. 14, 2022, 60 days after enactment of the legislation. The projects receiving funding were announced Jan. 19, 2022.

"The IIJA funding is for major Civil Works mission areas, including navigation, aquatic ecosystem restoration and flood damage reduction," said Detroit District Deputy District Engineer Kevin McDaniels. "The majority of money the Detroit District is receiving will fund construction of the New Lock at the Soo project." Nearly $479 million is slated for the Corps of Engineers mega project in Sault Ste. Marie, Michigan. An additional $37 million is for major rehabilitation and $4 million for other existing facility work.

"The Soo Locks are nationally critical infrastructure, and their reliability is essential to U.S. manufacturing and National Security," said McDaniels. "A failure of the Poe Lock would have significant impacts to the U.S. economy, especially the steel industry."

There are currently two active lock chambers at the Soo Locks facility, the Poe and MacArthur locks. The Poe Lock is the only one large enough for the 1,000-foot freighters to traverse the locks. The New Lock at the Soo is being built on the site of and replacing two inactive locks, the Davis and Sabin, and will be the same size as the Poe Lock at 1,200-feet long and 110-feet wide, according to the news release.

Nearly all domestically produced high-strength steel used to manufacture products like automobiles and appliances is made with taconite (iron ore) that must transit the Poe Lock, noted USACE.

The remaining $36.5 million will go to environmental infrastructure, navigation, continuing authority projects and other civil works programs around Michigan and in Duluth-Superior Harbor, Twin Ports in Duluth, Minnesota and Superior, Wisconsin. "The remaining fiscal year 2022 IIJA funding is just as critical for the Great Lakes in general," said McDaniels. "With it, the Corps of Engineers can develop, manage, restore and protect our Great Lakes water resources and infrastructure."

"The New Lock at the Soo will provide much needed resiliency in the Great Lakes Navigation System," McDaniels said. "It will eliminate the single point of failure in our nation's iron ore supply chain."

Video of the American Century arriving in Superior for winter layup: https://youtu.be/… 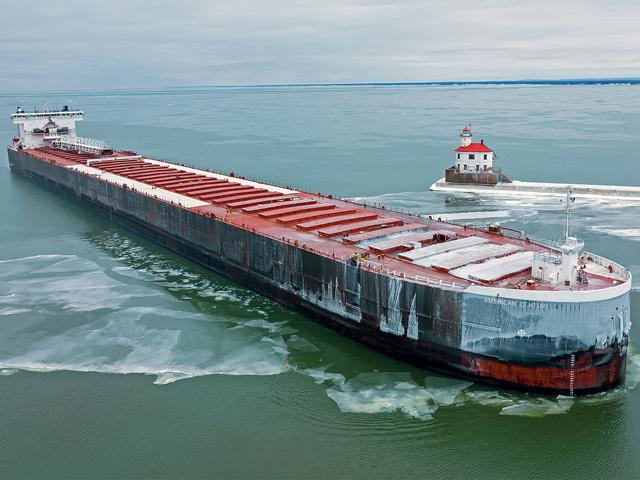