A federal judge on Tuesday granted BNSF's request for a temporary restraining order blocking union workers from striking over a new company attendance policy set to go into effect on Feb. 1.

BNSF had asked a federal judge to prevent a Feb. 1 strike after the Brotherhood of Locomotive Engineers and Trainmen (BLET) and the Transportation Division of the International Association of Sheet Metal, Air, Rail, and Transportation (SMART-TD) union both threatened to strike over the new attendance policy they say would penalize workers for missing work.

On Jan. 25, William Jungbauer, president of Yaeger & Jungbauer Barristers, a St. Paul, Minnesota-based law firm that specializes in railroad law, reported on the firm's Facebook page that a judge granted the railroad the temporary restraining order, which will expire Feb. 8, averting a strike for now.

In announcing the new attendance policy, BNSF stated in an FAQ it sent to employees that the company "must improve crew availability to remain competitive in the industry" and that their revised Hi-Viz program would help with this issue "by incentivizing consistent and reliable attendance." BNSF went on to state that a reduction in absenteeism would improve predictability of work assignments.

However, the affected employees and their unions made clear that they view BNSF's approach to this issue as a juxtaposition. That is, if the carrier instead focused its efforts on predictable scheduling of assignments and competent management of its furloughed employees, there would be no need to impose such draconian attendance policies, noted BLET.

Following BNSF's announcement of the new attendance policy, members of the BLET and the SMART-TD who work for the BNSF Railway on Jan. 12 initiated steps to go on strike. Collectively, the two unions represent more than 17,000 active members at the BNSF.

In a Jan. 13 news release, BLET and SMART-TD said BNSF's new attendance policy is a points-based system that "penalizes employees -- who in many cases have no assigned days off -- any time they take time off work for practically any reason."

They added, "It is so restrictive that employees would be penalized for missing work to attend the funeral of an immediate family member."

Pierce and Ferguson said "This unprecedented BNSF policy repudiates direct and clear contract language, and in application, will attempt to force our members to report for duty without regard for their medical condition as we struggle to come out of a pandemic.

"It also stands to take away any ability by our members to avoid working fatigued when they are routinely called without warning due to the complete lack of reliable train lineups, thus creating the potential for an even more unsafe railroad operation. So-called 'forced overtime' in an industry where safety is so critical not only repudiates our agreements, it stands to enact irreparable harm on hundreds of full time employees whose non workplace obligations prevent them from being at work every day of their life."

WHAT WOULD A STRIKE MEAN FOR GRAIN SHIPMENTS?

In addition to facing the threat of a possible strike, BNSF has been dealing with operating challenges due to extreme cold weather in the northern United States.

In its most recent operations update on Jan. 21, BNSF said its operating teams were generating some improved service performance while still confronting a challenging operating environment in the North Region. Arctic cold has remained largely in place throughout much of the Northern Plains and Upper Midwest. Temperatures in many locations across North Dakota and Minnesota on Jan. 20 dropped to around 25 degrees Fahrenheit below zero.

Air flow issues affected some trains in the region earlier that week, with stoppages that resulted in track outages on several subdivisions.

"As we have reported, train length restrictions are necessary and additional locomotives are required to generate proper air flow for trains' braking systems in these extreme cold conditions. We have also experienced reduced productivity at some terminals in the region due to multiple switch and air flow issues." Since that Jan. 21 report, there has been more extreme cold in North Dakota and Minnesota, which likely has exacerbated the operations in the North Region.

RUNNING BEHIND ON CARS

Various shippers noted that BNSF is running roughly three weeks behind for grain dedicated train service placements and shuttle turns have been slow. That means that loaded shuttles sent to the Pacific Northwest have not been coming back in the normal timeframe. Shippers who rely on a 12- or so day turn in the winter (versus summer turns of seven or so days) have said that since the end of 2021 through present, some turns have been up to three weeks.

While the snow and extreme cold since the end of December has had a part in those delays, the uptick in COVID-19 omicron variant cases has caused shortages of employees able to run trains and other railroad related duties. Meanwhile, secondary shuttle freight values continue to rise, which can cause elevators to weaken basis to cover higher freight costs.

A strike, if it were to happen, would exacerbate the situation. 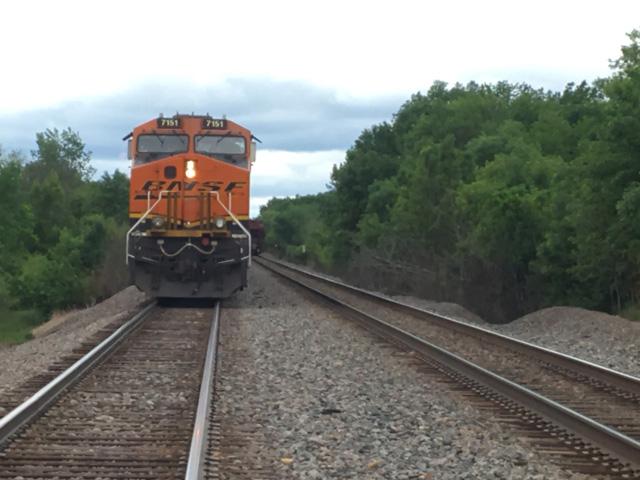