U.S. Grains Council (USGC) recently released its 2021-22 Harvest Report which was based on 610 yellow corn samples taken from defined areas within 12 of the top corn-producing and exporting states. The report noted inbound samples were collected from local grain elevators to measure and analyze quality at the point of origin and provide representative information about the variability of the quality characteristics across the diverse geographic regions.

Six of the 12 key corn-producing states expect large increases (greater than 5%) in production relative to their 2020 crops. Only Kansas and Missouri are projected to have year-over-year reductions of more than 3% production in 2021. While hot and dry weather led to reduced yields expected in North Dakota and South Dakota, increases in harvested acreage are expected to more than offset the reduced yields and lead to increased production relative to 2020.

USGC said overall, 2021 was characterized by early season, helpful rains at pollination time, a warm grain-filling period and quick dry-down and harvest. "This crop was planted earlier than average and experienced a warm overall growing season, but cool temperatures during the critical early grain growth stages, with the good-to-excellent crop condition rating remaining near the five-year average throughout the season." Here is a link to the entire report: https://grains.org/…

Cory Tryan, grain manager for Alton Grain Terminal, LLC, of Hillsboro, North Dakota, said, "We were dry most the summer and caught some nice timely rains late that made a big difference. Our trade area had a wide range of yields from 70 bushel per acre (bpa) to 160 bpa, with an average yield of 130 bpa. Quality was outstanding with BCFM (broken corn and foreign material) at 1.5%, test weight over 57 pounds and moisture coming off the fields at 15%-17%. We were able to plant and harvest all the intended acres this year and producers did a good job of getting some contracted during the spring highs."

"Corn yields in southeast North Dakota averaged 155 bpa," said Keith Brandt, general manager for Plains Grain and Agronomy, at Enderlin, North Dakota. "We had a range of just under 100 bpa to over 200 bpa on irrigated ground. Many said it was better than expected considering the dry growing season. Our corn graded 56-57 lbs, 16% to 18% moisture. We have a handful of customers still harvesting, so not at 100% done. Our operation dumped more corn at harvest than expected, which was driven more by harvest price than farm storage filling up, as $6 to the farmer buys a lot of corn. We expect 5% to 10% less corn will be planted in 2022 due to high input costs the driving factor. Choices will be either wheat, soybeans, barley, canola, and sunflowers to be planted on those acres."

"We finished up corn harvest about a month ago now with a farm average yield that was about 10% below our long-term average," said Ryan Wagner, of Wagner Farms at Roslyn, South Dakota. "Yields varied greatly from field to field, which is not surprising given how much rainfall varied during the summer with fields just a few miles apart seeing large differences. Similar to other dry years, last year's crop was also a major factor with corn planted on wheat stubble outperforming corn planted on soybean stubble by a substantial margin."

Wagner noted the second half of harvest was a bit of a struggle fighting the mud because after a dry summer, they did have a wet fall. "Ground conditions held up well until the last few rain/snow events when things got really sloppy, so I think it's safe to say we are heading into the winter with a full moisture profile. Grain quality was excellent with 56 lb-plus test weight across the board. Moisture was in the 18%-20% range when we started and never did really drop throughout harvest."

Corn harvest in central South Dakota was a mixed bag, especially given the drought conditions during the summer, noted Tim Luken, manager of Oahe Grain in Onida, South Dakota. "This harvest all depended on where it rained on timing and also past crop history. It starting raining the last 1/3 of August and it did this into the middle of September. Our area received 8 inches of rain at this time and every bit of it soaked in and actually greened up the corn and soybeans again. When this happened, it delayed our fall harvest for about three weeks. In the meantime, this did put test weight on corn, milo and sunflowers and helped finish out maturity."

Roxi Thompson, of Thompson Land and Livestock in Harmony, Minnesota, said, "We had a good harvest in southeast Minnesota and maybe our second best corn yields, while soybeans yields were average. Across the entire operation, our corn yielded 224.3 bpa and the test weights at the ethanol plants are very good at 57 lbs up to 59 lbs. Our rainfall was very limited during the growing season, so we were thankful to have a good harvest and especially thankful for the warm weather throughout harvest which saved propane expense for drying corn.

"Harvest was probably the best I have seen in my lifetime with many fields averaging 200 bushel plus for corn and 50 bpa plus for soybeans," said Matt Schwab, from northeast Michigan. "Harvest conditions were tough with saturated soils and frequent rain events through October and November, but we will take the good with the bad!"

In New Haven, Kentucky, Quint Pottinger said, "Our corn harvest was overall good. We try to spread out our planting to spread out our risk and because of that we almost never hit a home run, but we are constantly improving our base average that way.

"We had some farms average over 250 bpa and some average under 150 bpa. I did have one brand (yes entire brand, not variety) that completely fell on its face. It had been trending down but still would tough out through most conditions, but not this year. I chatted about it with my rep and his response was that I should have used fungicide. We get over our acres on an as-needed basis with fungicides, but I am not sure that was the whole problem. If a competing brand has similar traits, planting dates, and growing conditions, then the yield differences can't be blamed on fungicide. If so, this brand has some serious issues in their pipeline development. Nevertheless, our biggest issue in yield disparity was brand. We won't completely remove it from our seed line up, but will reduce the acres and go back to the drawing board on placing varieties," Pottinger said.

Pottinger added, "Luckily, we didn't have too many breakdowns during harvest. The issue of getting parts affected a few around us, slowing them down. We only had one hiccup that took us out a week. Overall, our quality was good and the distilleries are happy with it so far!"

Randy Uhrmacher, of Hastings, Nebraska, said, "Overall we had a record corn harvest with irrigated corn at 250 bpa-plus, dryland corn 100 bpa to just under 200 bpa, depending on how much rain. The rain was spotty this summer, but our disease pressure was low this year."

Kenny Reinke, of Neligh, Nebraska said, "There were periods we irrigated very heavily, but still didn't run as hard as 2012. The yields we saw this fall definitely made all the hard work worth it. The soybeans were near record yields for the farm, although I did see the highest spot yields ever on soybeans and the bean size was very large this year, which played a part in yields."

Reinke added, "Our corn set yield records on the farm with very good quality, which is status quo for our area. We had one of the latest killing frost dates that I can remember this year, which led to the corn carrying more moisture than we expected, given the growing season we had. By the last week, the frost was finally having an effect (on) moisture content with the corn dropping over a point during that time. Labor continues to be a huge strain especially during harvest. I had to get very creative with schedules and planning to make everything flow the best it could."

Quentin Connealy, from Tekamah, Nebraska, said, "Bean harvest was a tad slow with rain and weather delays. We started the year with some corn harvest as we had some early numbers dry up nice in the field for early harvest. Fall corn harvest went slow and steady as we set some record number yields in the area thanks to plentiful rains during the growing season. We are primarily irrigated but didn't have to run much irrigation this year. All the bins got filled up and we shipped a little extra to the elevators to finish up harvest."

Given the high-ranking quality report from USGC and most farmers and grain elevators, 2021 overall sounds like it "was an incredible harvest with some 'amaizing' yields," noted Connealy. 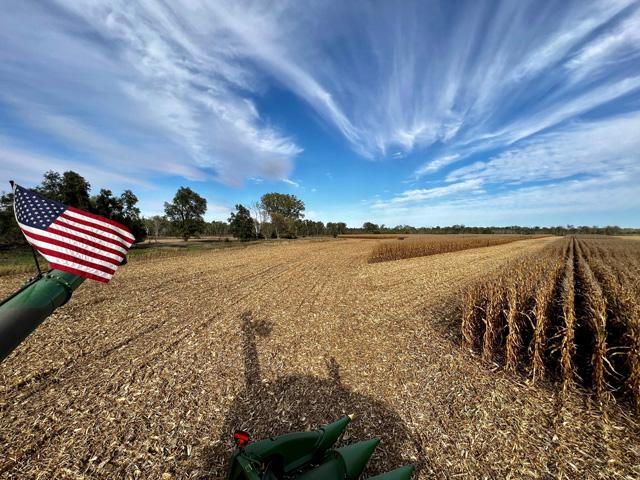