"Expectations for this year are, of course, for better conditions in the west as opposed to last year where drought has not been an issue this year," said Dave Green, executive vice president of the Wheat Quality Council.

"South Dakota and North Dakota Wheat Commissions have been reporting that their crop is in good shape so far this year," said Green. He told me that, as of July 19, he had 55 scouts signed up to participate. "This year, I am sending a higher percentage of cars to the southwest due to higher acreage there."

I had a chance to speak with farmers and elevator managers in North and South Dakota the past week and heard mixed expectations for their spring wheat crop.

Keith Brandt, general manager of Plains, Grain and Agronomy in Enderlin, North Dakota said, "This spring wheat crop isn't the crop we had the last two years. The heat and dryness in May hurt wheat on lighter soils. And, we didn't get the tillering that we should. The stands are uneven and there is going to be issues with scab too. I don't buy the USDA yield estimate of 48 bushels per acre (bpa) statewide. That would match the record." Enderlin, North Dakota, is located in Cass and Ransom counties and is southwest of Fargo.

An elevator manager in east-central North Dakota said that wheat is average to just below average to the east, south and north of him. "The Hope/Finley/Clifford areas are a little drier and were planted two weeks late and are a little below average for sure. All the wheat started out very nice, hit a dry spell and went backwards," he said. "It had enough moisture to go on, but headed short and thinner than normal. It got good rains so it should have filled nice."

He told me that some areas are turning and are about two weeks out, but other areas still need a month. "I will tell you that some fields by my elevator look better from the road. One field I walked in had short and thinner-than-normal plants, with small heads and a lack of kernels. This was a field where the farmer put in all the necessary inputs and normally yields above average, but this year it will be average at best."

Jeff Kittell, merchandiser at Border Ag and Energy in Russell, North Dakota, said, "The spring wheat in our area looks good at the present time as we have been receiving rain all summer. Concern now is for scab and vomitoxin as humidity and lots of dew-filled mornings are perfect conditions for disease. However, I am seeing a lot of fungicide spraying with hopes that it will keep disease at bay." Russell is located in the north-central part of the state in Bottineau County.

One year ago, Allan Klain, Turtle Lake, North Dakota, had this to say: "We are in the dark red on the drought monitor here. My hay ground is burnt up and my spring wheat is thin stands and headed out and barely a foot tall."

This summer, he has better news to share. "Our spring wheat looks good and we are expecting good yields. The early seeded fields lost some yield potential due to a very dry May. We had some emergence issues due to dryness at planting. It has evened out, but harvest could be drawn out. There has been a fair amount of spraying for fusarium (scab)." Turtle Lake is in McLean County and is in the south-central part of the state, north of Bismarck.

Tim Luken, manager of Oahe Grain in Onida, South Dakota, said, "Spring wheat plants are short this year, and I am very surprised at this. We had moisture to start things off in good shape. The wrath of Mother Nature, I guess! Spring wheat is turning fast, and I am expecting we see some spring wheat cut by the end of the week." Last year, Onida was in the throes of a never-ending drought, and while two hailstorms moved through his area this summer, he was uncertain as to exactly how many spring wheat acres were lost along with winter wheat and corn. Onida is located in Sully County in north-central South Dakota.

"Things are looking pretty good around here considering how late the crop went in," said Ryan Wagner, Wagner Farms, located near Roslyn, South Dakota. "I'm worried we pushed it a little too hard in June with all the heat, but rainfall has been more than adequate. Starting to hear a few reports of scab showing up, but not sure if that is just localized or widespread. It's been quite a while since we have had a bad scab year, so maybe we are just overreacting." Roslyn is located in Day County in northeastern South Dakota.

"Overall, I'm starting to question whether or not this crop is as great as the USDA conditions indicate it is," said Wagner. "Acres are huge obviously, but between the scab issue and the warm June, I'm just not convinced it's going to be a bumper crop. Early winter wheat taken off around here this week was disappointing, but everyone says the spring wheat looks better."

Wagner said that, on his farm, it's going to be a tough year for spring wheat because they got "slammed" with some pretty significant hail on July 9 on about half of his acres. "The crop insurance adjuster is coming to assess the damage, but we probably won't learn too much because the type of insurance we have requires all claims get deferred until after harvest."

It will be interesting to see what the scouts find this year, especially given the uncertainty in some areas mentioned above.

"Every car gives a detailed report each evening on their findings compared to previous year's results in each spot inspected," said Green. The 2017 spring wheat tour ended with an average yield of 38.1 bpa versus the USDA 2017 September Small Grains Report final U.S spring wheat yield at 41.0 bpa.

When I was on the hard red winter wheat tour this past spring, Green told us that the tour is the industry's "first look" at the crop. "We know between now and harvest that yields can change, but the tour is a good starting point. It gives us the first snapshot of the 2018 crop." Scouts will be posting comments and pictures of scouted fields on Twitter using the hashtag #wheattour18.

And, as the saying goes, a picture is worth a thousand words. 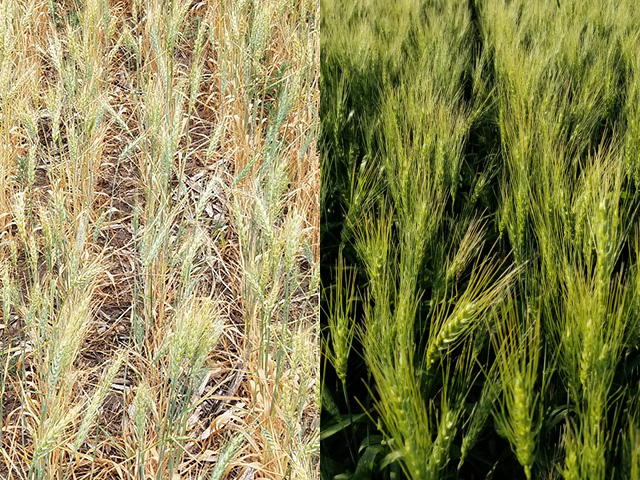