An oceangoing vessel named the Federal Bering was the last saltie for this shipping season when it entered the port of Duluth-Superior Dec. 14 and docked at CHS terminal 2 in Superior to load wheat and canola bound for Mexico.

"It's an interesting shipment because it will be going into the Gulf of Mexico and Mexico," spokesman Marc Gagnon of Fednav, the Canadian owners of the ship, said in the Great Lakes and Seaway Shipping news. "This proves that you can be more efficient exporting through the port of Duluth even to Mexico than to take barges down the Mississippi (River) or rail or something else."

A press release from the Duluth Port Authority stated that the Federal Bering, like its fleet mates -- the Federal Baltic, Federal Beaufort, Federal Barents, Federal Bristol and Federal Biscay -- was built by Oshima Shipbuilding in Japan. "All six sister ships are 199.98 meters (656 feet) in length and have a beam of 23.76 meters (77.9 feet); each was built with four deck cranes and four "box" holds for greater flexibility.

"These environmentally advanced vessels consume 28% less fuel and produce 28% fewer emissions than similar ships built for the company just 10 years ago; their fuel-efficient engines will also reduce nitrogen oxide emissions by over 30%. All six new-builds were delivered between May and November 2015, as part of a series of 27 new ships added to Fednav's fleet in the past four years, 14 of which are committed to Great Lakes-Seaway service."

While the Federal Behring is officially the last saltie to depart Duluth, an oceangoing freighter, the Cornelia, was sitting offshore from Duluth for six weeks after it came under investigation by the 9th District of the U.S. Coast Guard and the U.S. Attorney's Office for violations related to the discharge of oily water.

Duluth Seaway Port Authority spokeswoman Adele Yorde said that the German-owned vessel was allowed into the Clure Public Marine Terminal to refuel and take on provisions the afternoon of Dec. 16. "The vessel will dock overnight," Yorde said, while also confirming a pilot has been assigned to the ship. "Foreign vessels are required to have on board a U.S. or Canadian pilot to help them navigate the shipping channels through the Great Lakes, according to the Great lakes and Seaway Shipping."

On the morning of Dec. 18, Duluth Shipping News reported that the Cornelia left the port with her cargo of grain that she loaded at CHS 1 about 40 days ago after the Coast Guard reported that they "have reached an agreement."

Late on Dec. 18, Yorde sent a press release to DTN stating, "The Port of Duluth-Superior will bid a fond farewell this evening to the last visiting oceangoing vessel of the 2015 season, the Federal Bering, when she departs beneath the Aerial Lift Bridge Friday evening." Both ships needed to get moving by Dec. 18 or possibly risk not making the closing of the Welland Canal Dec. 26. Oceangoing vessels will then need to exit the last set of locks in Montreal before the St. Lawrence Seaway closes Dec. 30 for the season.

While the grain season is over for the year, lakers, which are confined to the Great Lakes, get a longer season if the channels don't ice up. It is likely, given the warm weather, they will make it to the Jan. 15 Soo Locks closure without much problem.

SHIPMENTS OF GRAIN STRONG IN 2015

The Great Lakes Seaway Partnership, a coalition of leading U.S. and Canadian maritime organizations, announced in a Dec. 10 press release it had a strong year in grain shipments.

"Agricultural commodities along with dry bulk, general cargo and containerized goods continued to enhance cargo tonnage on the Great Lakes-St. Lawrence Seaway System during the month of November," Betty Sutton, administrator of the Saint Lawrence Seaway Development Corporation, said in the release.

"With just under a month remaining in the 2015 navigation season, we anticipate vessel activity in the Seaway System to be robust right up to closing," she stated.

"The St. Lawrence Seaway reported that year-to-date total cargo shipments for the period April 2 to Nov. 30 were 32 million metric tons, down 10.5% over the same period in 2014. U.S. grain shipments were up by 11% in November over last year. The dry bulk category was up by 1% over 2014 with potash, stone, and gypsum in the positive column, at 94, 21, and 45% respectively. The general cargo category was down 16%. Iron ore and coal remained down in November by 7 and 38% respectively. The liquid bulk category posted a downturn of 11%."

"From our perspective -- and I cannot give the perspective of the farmer whether it's Canadian or U.S. -- it's been pretty good," Gagnon said. "Typically, our backhaul -- we come in with general cargo -- is we get out with grain for export." The departure of the Federal Bering and her load of grain, represent a solid year for grain shipments out of the Twin Ports in 2015. 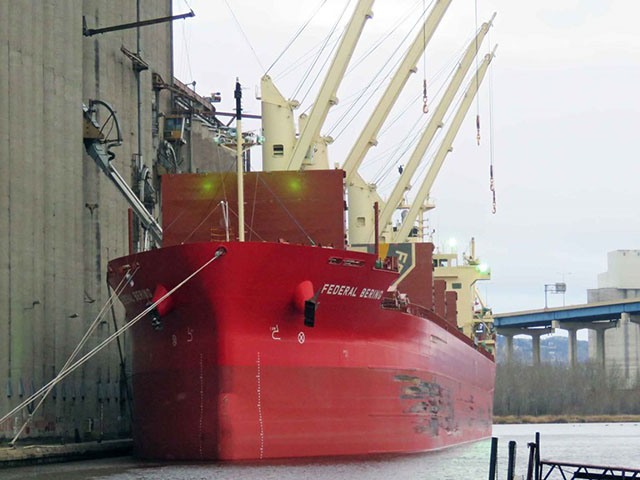