BOONE, IOWA (DTN) -- With six propellers and huge batteries, it looks like an oversized aerial drone, one that fell into the wrong tank of ooze.

"The reality is wow, while this has drone capabilities, but it's beyond drones. It's really an aerial ATV," said Mick Kowitz, CEO of Ryse Aero Technologies, standing in front of his company's Recon 2 prototype aircraft.

"It's an aerial ATV to get you from point A to point B so you can get out and look at your fencing to see if there's a problem and be able to fix it, then jump to that next spot and fix that, no drone necessary, no ATV necessary, just one vehicle to do all of that," Kowitz said.

The idea of an "aerial ATV" was enough to draw a big crowd at the annual farm show in Boone, Iowa; scores of onlookers packed together as a piloted Ryse prototype took a 116-second flight, rising about 8 feet off the ground and covering little more than 20 yards in the air.

It wasn't a huge flight, but Ryse is hoping it's the start of big things.

The Cincinnati, Ohio-based operation was only founded in October 2021, and already has two models built: the Recon 1, which flew at the show, and the Recon 2, on display. Kowitz said several machines are also in the wild for testing.

The idea from Ryse is the machine, officially an ultralight eVTOL (electric vertical takeoff and landing) aircraft, can be an asset to farmers and ranchers. They could use it for tasks such as to scout fields, especially when equipped with top-tier cameras, or check on cattle.

"We built this for people with a purpose, to make sure there was an ability to do something when you got there," said Erik Stephansen, the Ryse director of regulatory affairs and aeronautics. "Think of this as the ATV to get you there so you can do something, but it also has that drone capability to do mapping and all the other things."

The Recon has a flight time of 24 minutes and, driven by its six 60-inch propellers, a top speed around 60 miles per hour. That gives users and their tools -- inside of a 250-pound advised weight limit -- roughly a 12-mile range with an advised ceiling of 400 feet. The batteries can be swapped out in an instant and replaced to get the machine back in the air. The whole thing weighs just 285 pounds.

The company said the controls are easy to learn, more like a skid steer than a helicopter, and can be picked up in just 15 minutes. It plans to offer lessons outlining as much and making fliers aware of rules and regulations. It won't require a pilot's license or a drone operator's license.

"It's actually safer than other ultralights and ultralights are the safest aerial vehicle out there," Kowitz said. "We have six independent propulsion systems and six independent batteries. They're all talking to each other, feeding each other. If one motor stopped spinning, the others would help keep it afloat."

WHEN ON THE MARKET

Ryse hopes to have a version of its Recon on the market by the second quarter of 2023, retailing for $150,000. There could be many future applications. The machine can land on water and float. Maybe someday people will use something similar for grocery store runs. But for now, Ryse said agriculture is its focus.

"You guys are really great at understanding the fusion of science and art, but are also really respectful of equipment," said Stephansen. "You deal with dangerous equipment all the time that might have risk. We built a lot of safety features into this to minimize that, but want people who will be thoughtful about how they operate. We had a lot of conversations and really felt the farming and ranching communities would understand. That inspired us." 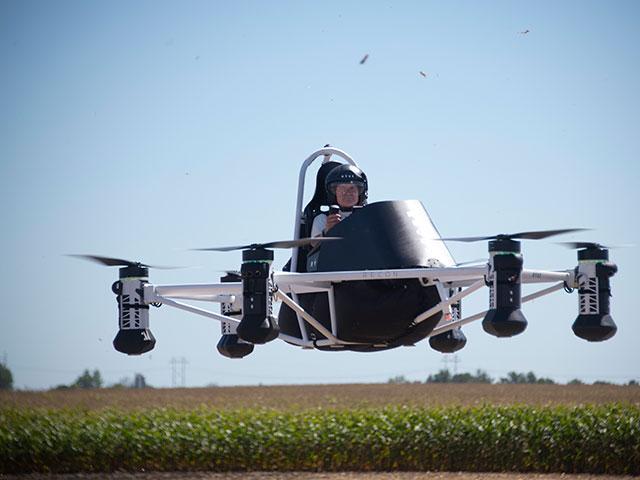