I, like many farmers I would imagine, have a love-hate relationship with the hydraulic systems of farm machinery.

Love because I heard the stories many years ago from my grandpa of having to lift tractor-mounted cultivators by pure muscle power. These hydraulic systems are needed in many tasks with farm equipment, from lifting heavy implements to running various augers, to operating a loader on a tractor.

The hate comes from when hydraulic hoses or lines break on some piece of equipment and it usually results in a huge mess. I have ruined many shirts and jeans fixing hydraulic leaks.

Researchers at Purdue University have begun studies on hydraulic systems that connect tractors and implements to optimize these systems. The project is being undertaken with $3.2 million from Department of Energy funding, according to a Purdue news release.

Andrea Vacca is Purdue's Maha Fluid Power Faculty Chair and professor of mechanical engineering. He is also the director of the Maha Fluid Power Research Center, the largest academic hydraulics lab in the country.

"Fluid power is everywhere," Vacca stated in the release. "A tractor is an example of a vehicle that uses fluid power to actuate everything from the steering and propulsion, to powering the implements it pulls behind it."

The hydraulic control system of the tractor has shown only 20% efficiency when connected to the hydraulic system of implements such as planters, seeders and balers. Patrick Stump, a Ph.D. student in mechanical engineering, said the two systems are almost fighting each other.

"As a result, when it's connected to a planter, the tractor always has to run at extremely high power, which wastes fuel and increases emissions," Stump said.

Vacca's team is focused on a specific combo of tractor and planter, both provided by Case New Holland Industrial. To tackle the issue of optimizing the tractor-planter combo, the team chose a three-phase approach.

First, the researchers needed to build a simulation model in the computer of the hydraulic system. Xin Tian, a Ph.D. student who developed the models over four years, said they began to test individual components of the system; when they were more accurate, they then tested the entire system.

The researchers then moved to phase two: developing solutions they could test. Tian said they tested different planting conditions with different amounts of pressure and flow rates.

"If the model shows promising improvements in power and efficiency, then we can begin to implement these changes under real-world conditions," Tian explained in the release.

In the third phase, real-world tests, the team outfitted the tractor-planter combo with many sensors. They looked at how much power the tractor is consuming, what the hydraulic pumps are doing and what the pressure and flow rates are throughout the planter.

The team conducted several runs in the spring of 2021, where they planted corn at different pre-determined engine speeds and planting rates. Vacca said that by analyzing the data, they discovered their new hydraulic control system translated into a 25% efficiency increase.

"Given the amount of fuel that a typical tractor consumes, that's a massive improvement," Vacca said. "Our project goal is to double the efficiency of the overall hydraulic control system."

As for future research, the team plans on instituting a pressure control approach for the control system. This has never been attempted in agricultural equipment. 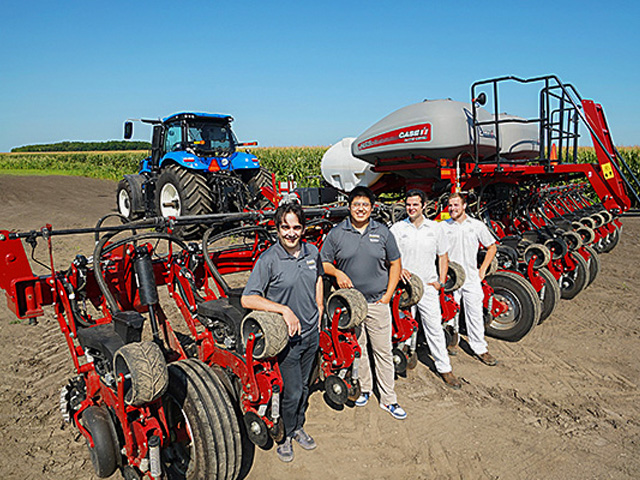