At a July 31 media event in Ames, Iowa, he wheeled through the early days of the company, the present recovery from a boom-and-bust industry cycle, technologies of the future and even a question or two about Case IH's dealings with Precision Planting.

Graphics in Walker's presentation to the group featured Jerome Increase Case, the company's founder and owner one of the most intriguing middle names in the any industry. In 1842, Case started the Machine Threshing Works in Racine, Wisconsin, still the home of the firm that became J.I. Case and Company.

It later merged with four other companies to become the International Harvester Company and expanded its operations globally. In 1985, the company rebranded as Case IH and now is part of CNH Industrial, which also owns New Holland. The larger company is owned by an Italian investment firm named Exor, which is based in the Netherlands. The world has shrunk since 1842.

Recent times saw an outpouring of cash from customers as commodity prices spiked. From 2012 through 2013, Case IH factories hummed to keep up with demand. When commodity prices crashed, so did machinery sales. The crash left farm equipment manufacturers and their dealers in a mess. All those new equipment sales had generated enormous numbers of used equipment trade-ins, which swamped dealer lots and auction houses.

"It has taken us quite a while to get rid of that," Walker said.

Faced with an overstock of expensive used equipment, some dealers shied away from trade-ins and new sales slumped badly. Walker said that slump probably has ended. "We see in the [used] marketplace today that combines and four-wheel drives look very, very strong, both in pricing and in low inventory levels. That opens the dealer's mind a little about making trades."

One category that still lags is the large row crop tractors, Walker said. In part that is due to some manufacturers, including Case IH, going into "an aggressive mode" with leases from 2012 into 2015. As those tractors came off leases and returned to dealers, they added to the glut and have made the recovery of the new row crop tractor market a little slow. "This too shall pass," Walker said.

Currently, some of the tractor equipment fleet has lot of hours on it, Walker said, and some of it is running on older technology.

"There is an upside coming," he said. "We can at least say we have hit bottom."

The new normal for the farm equipment market will see farmers replacing equipment, but at a slower rate than during the boom.

And the future? Case IH gave a peek into a high tech future last year when it introduced a concept autonomous tractor based on a Magnum tractor. Some test models of the self-driving vehicles are currently working in vegetable farm settings in California, Walker said, where they can do "the same things over and over. It [the autonomous tractor] is perfect for that."

Its retail advent on the broader, more varied, farm market may be years away, but Walker said the autonomous tractor is "a way to show all the forward-looking technologies we are developing all in one vehicle."

In a side conversation, I asked Walker how the recently announced sale of Precision Planting to AGCO would affect Case IH.

His company has an agreement with Precision Plant to incorporate many of its technologies into Case IH planters. The new 2000 Series Early Riser planters, for instance, are loaded in the factory with Precision Planting devices -- everything from SpeedTubes for up to 10 mph planting to automatic downforce equipment. Without access to those devices, Case IH planter engineers would have to go back to the drawing board for a redesign.

Customers need not worry, Walker assured me. Case IH's agreement with Precision Planting remained in effect. The deal preceded the now abandoned agreement that would have sold Precision Planting to John Deere, and SpeedTubes et al will continue to be part of Case IH offerings.

Did Case IH bid on Precision Planting? "No comment," Walker told me with a smile. 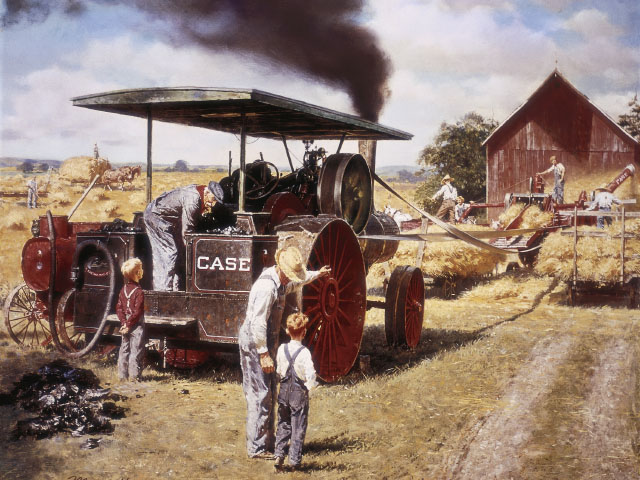