I get "the look" every so often.

This would be when I meet someone new who is not from an agricultural background and they ask me what I do for a living. Obviously, he understands the farmer part, but when I tell him I'm an ag reporter for an agricultural news service and I explain it somewhat, I then see the glazed look come over his face.

I think so many people are now so far removed from production agriculture that they can't wrap their minds around the fact that modern agriculture today is a high tech industry. They think farmers play in the dirt or raise livestock the old-time way. They just don't understand how much technology farmers and ranchers use to become as efficient as possible.

Food companies who advertise on television help sustain this myth.

For example, a cheese company and a deli meat company have ads that show their products in front of a folksy, old barn. I'm pretty sure their products are not produced there, but probably in a new modern facility.

Maybe when the companies do their marketing research it shows consumers like this fairytale. However, to me it appears these food companies are very leery about showing new technology. This seems completely backwards to me, and then we wonder why people don't understand modern ag.

I guess that is why I'm not in marketing.

I came across an interesting article titled "You Decide: Is Farming a High-Tech Industry" in the North Carolina State University (NCSU) College of Agriculture and Life Sciences News. (See http://bit.ly/…) The article was written by Mike Walden. He's a professor and extension economist at NCSU.

In the article, Walden detailed some of the technical advances in agriculture over the last 100 years.

He pointed out the productivity of American farms increased an amazing 140% from 1910 to 1950 with introduction of tractors. Then farming took another incredible 170% leap from 1950 to 2010 with the introduction of machinery like the combine and practices such as irrigation and pest control.

This advancement in agriculture led to three major economy-wide changes, he noted.

One change was the need for fewer workers on the far. He said millions of them moved to the cities and influenced new industries.

"Ex-farmers moving to cities built and operated the factories of the growing manufacturing sector. Later, the children and grandchildren of these farm-to-factory workers were behind the growth of the technology, education and healthcare sectors," he explained.

The second change he highlighted was urbanization in states such as North Carolina as the population shifted from farms to cities.

The last result Walden wrote about was the increased affordability of food.

"A century ago the average household spent over one-fourth of their disposable income on food. Today, food spending -- both for food eaten at home as well as food consumed in restaurants -- requires only 9% of the typical household's total budget," Walden wrote.

The author stressed that new technology is going to increase farm productivity in the future.

He pointed to advances in real-time data to help farmers become even more efficient in both crop and livestock production. Farm machinery is also part of this, and Walden mentioned environmentally friendly farm machinery, agricultural robots and advancement in tires reducing compaction issues.

That is an interesting question. Farming is an ages-old profession, and those in the business have to use new technology to survive or -- maybe the better word would be -- to thrive.

I know some people in ag really don't like the term "agvocate." But how is the non-ag population, which makes up most of our society, going to know what is really happening on farms and ranches today? I think it is very important to show others how modern agriculture utilizes new technologies to produce food as efficiently as possible.

Maybe then I will the glazed stare less often when I explain to people what I do for a living. 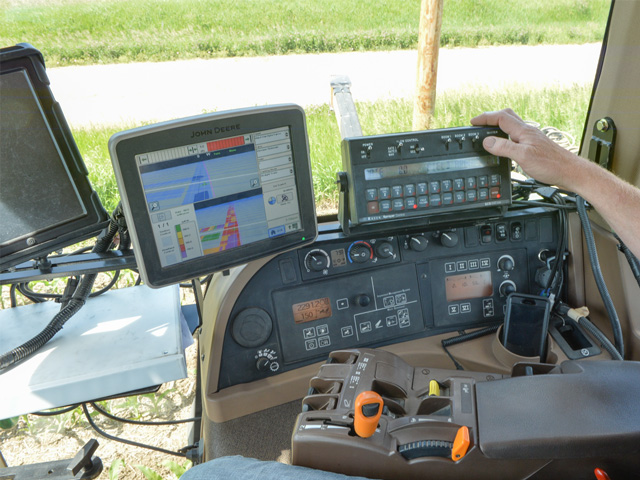