The 2016 Farm Progress show had fewer introductions of large machinery than in most years. In part that was because tractor models have a life cycle of about five years, and this was an off year for most manufacturers. In part the lack of new big iron is because of the down market in machinery. Why retool a factory for a new line of equipment at a time when demand is low?

AGCO was an exception. It introduced the Challenger 1000 Series tractors with four models ranging from 396- to 517-hp. With these big beauties AGCO intends to thread the needle between the pulling power of a small, articulated 4WD tractor and the versatility of a fixed-frame platform designed for row-crop chores. The idea is to have one tractor do the work of two. AGCO calls the Challenger 1000 Series the largest fixed-frame tractor in the world.

AGCO's German engineers added a drive train designed with a wide range of speeds from "half the speed of a garden snail" (65 feet/hour) to "a bit faster than a kangaroo" (31 mph), according to Challenger 1000 literature. The engineers also made the Challenger 1000 smart and comfortable. A large cab and ergonomic controls include a 10.4-inch AccuTerminal monitor, which integrates all functions -- including cameras -- in one location.

Crucial to the one-tractor-instead-of-two concept is the powertrain/transmission partnership. The AccuDrive powertrain on the Challenger 1000 Series combines with a continuously variable transmission with variable four wheel drive, according to Josh Keeney, AGCO tactical marketing manager: "The key to this ... is a drivetrain that drives both axles independently."

Most 4WD tractors have a fixed torque ratio between the front and rear axle. AccuDrive employs variable four-wheel drive that distributes torque independently over two transmission outlets on each axle. An "intelligent" four-wheel clutch manages the torque, so it can be shifted between the axles according to need. "We call it Challenger Torque Vectoring and this is how we get the power and traction of an articulated tractor into a fixed-frame platform," Keeney says.

Flexibility in weight is another key factor if a single tractor is to do the heavy work of pulling tillage tools one day and make planting passes the next. Challenger 1000 Series tractors come with an innovative ballasting system. They use wheel weights for ballast, which are not unique. But they also have a front three-point hitch system for adding up to 7,200 lbs. with a single block weight. Typically, front-mount weights are suitcase-style of about 110 lbs. each. It would take 65 of them to match the weight of a single Challenger 1000 block. Most tractors can only accommodate 30 suitcase weights, which is 3,300 lbs. Total ballasted weight of a Challenger 1000 can be about 50,000 lbs. Without weights, the tractors are about 32,000 lbs.

The Challenger 1000 Series, like its cousin the Fendt 1000 Vario, is powered by a compact six-cylinder, 12.4-liter diesel engine manufactured by MAN. It has a VTG turbocharger and maximum torque of 1,770 ft./lbs. at 1,100 rpms.

Dual hydraulic systems and load sensing pumps on the Challenger 1000 Series tractors mean you can make a headlands turn with an air seeder and never lose power to the blower.

The cooling system features a hydraulically driven fan with a separate pump that runs independent of engine speed. The fan is tilted upward to maximize airflow and to prevent residue from being sucked up from the ground.

The Challenger 1000 Series tractors will be manufactured in AGCO's Marktoberdorf, Germany, factory. 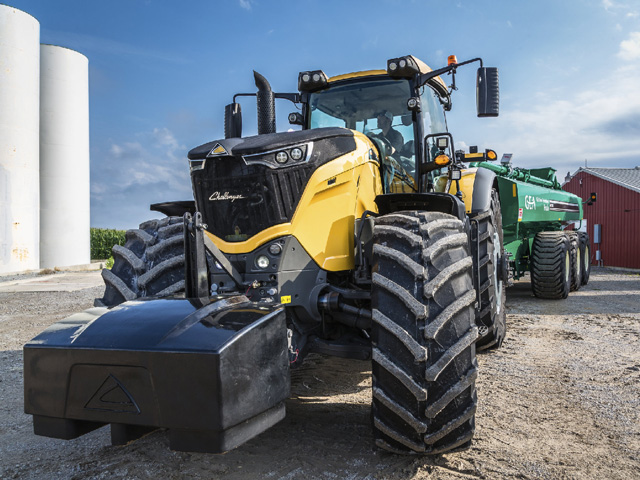