Agriculture lost a passionate voice last week. Kevin Bien, who was "Mr. Combine" to many of us reporters in the farm equipment industry, died after more than 40 years with Allis Chalmers and later AGCO.

I first met Kevin when I started as machinery editor for The Progressive Farmer 19 years ago. He was one of these gregarious guys who seemed to know my name even though we'd not yet met. As spokesman for Gleaner combines, he was a huge presence, a fount of knowledge and a true believer. I lost track of the number of times I heard him say, "It's a privilege to represent Gleaner combines." And he meant it.

At farm shows and new product introductions, Kevin Bien singled you out even in a crowd with strong eye contact and a nod. He moved toward you with open arms and a huge smile, peering at you over his reading glasses, which always seemed on the verge of falling off his nose.

There was something bear-like about Kevin ... in a teddy sort of way. He had a ready sense of humor and a quirky way of shaking his head when he laughed. But a joke quickly turned back to combines because that was his passion. Superlatives rolled off Kevin's lips in silvery streams, especially when talking about Gleaners. From some, that might have seemed false. From Kevin, it seemed only real; he was earnest. He was the only guy I ever met who teared up when talking about the virtues of transverse rotary combines.

Here is an excerpt from AGCO's release about his death:

"One of 35 employees selected by AGCO founder Robert J. Ratliff to form AGCO Corporation in 1990, Kevin held positions of increasing responsibility in sales and marketing over the next 25 five years. Leveraging his vast industry experience, product knowledge and passion, Kevin was given the most challenging assignments, including introducing the Fendt brand of tractors to North American farmers. Later, he led the resurgence of his beloved Gleaner combine brand, earning several industry awards in the process. Earlier this year, Kevin was inducted into the U.S. Custom Harvesters Hall of Fame."

The last time I saw Kevin was in March at Commodity Classic in New Orleans. He had his head down and was pumping up one of the aisles in the exhibit hall with a sense of mission surrounding him. He looked up just as our paths were about to cross, smiled and said something like, "Hi, old friend!"

I didn't know at the time that he had cancer. I did know that his assignment with AGCO had changed, and it seemed to an observer that he was headed toward retirement. When I asked what he would be doing, his answer was vague, so I asked him outright if he was retiring. "I don't know about that. I plan to hang around here has long as they will have me," he said. 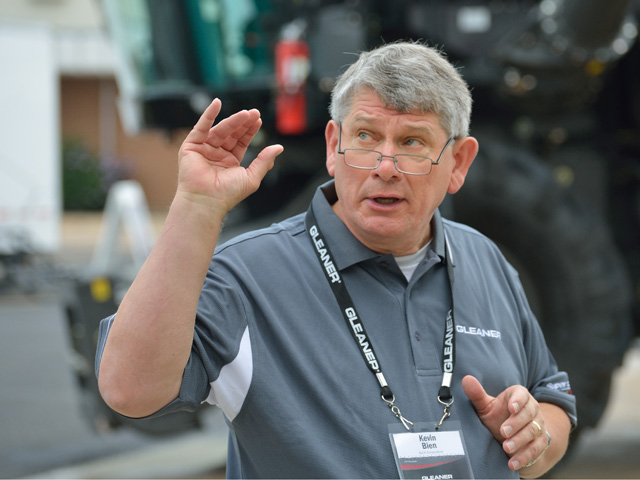