My home area of eastern Nebraska sees cold winters just about every year, but I wouldn't say we get an overwhelming amount of snow. I am sure people who live in the Great Lakes region and deal with lake-effect snow would think we get very little snow comparatively.

But every once in a while, we do face a winter with several feet of the white, fluffy stuff.

We had a winter like this 10-12 years ago and some farmers in our area had issues with farm buildings collapsing under the weight of snow accumulating on the roofs. Some of the buildings were older structures but others were newer farm buildings.

On our own farm at the time, we just had built a 100' by 50' machinery shed. There were some nervous days that winter, but luckily we didn't have issues.

A building failure can be the result of several items linked to the snow load present on the building, according to a press release from South Dakota State University. Extension specialists Dick Nicolai and Steve Pohl said these items include improper building design, improper building construction, situations where the actual snow load exceeds the designed snows load, imbalance of snow load on the roof and failure of one key member causing other to fail as a result of load transfer, also known as the "domino effect."

Nicolai said most post-frame agricultural buildings are designed to withstand 20 to 40 pounds of snow load per square foot. Some older buildings could have snow loads less than this.

"How do we know if a building is going to fail? There are tables that can be used as guides to estimate the snow load on a building roof," Nicolai said.

Pohl added that the level of snow loading is not intended to last all winter. All materials have a fatigue factor, and most roofs may be able to support a specific snow load for several days or a few weeks but probably not for 30 days or more.

"Engineers typically design wood structural components to resist the designed snow load for 60 days," Pohl said. "The 60-day load duration factor is cumulative for the life of the structure, not for just one winter."

Pohl recommended agricultural producers should check the places where snow accumulates on buildings, especially in areas where the roof and wall connect.

Nicolai and Pohl said people should not enter buildings or climb on roofs if there is evidence of building snow load damage. When one or more members fail under heavy loading, the results are often catastrophic and a total collapse can occur in seconds.

When removing snow, it is best to work from the bottom up, using a snow rake to remove the snow from the bottom as far as you can reach, Nicolai said. He added that shoveling the roof without the proper approach may actually cause more damage to the building by creating an unbalanced load on the roof.

Safety is always important when removing snow from a roof. The specialists recommend farmers work with a team, or at least a partner. People should use a safety line or some kind of rope harness to secure themselves on a steep roof to avoid injuries from a fall.

The SDSU press release can be found at https://www.sdstate.edu/…. 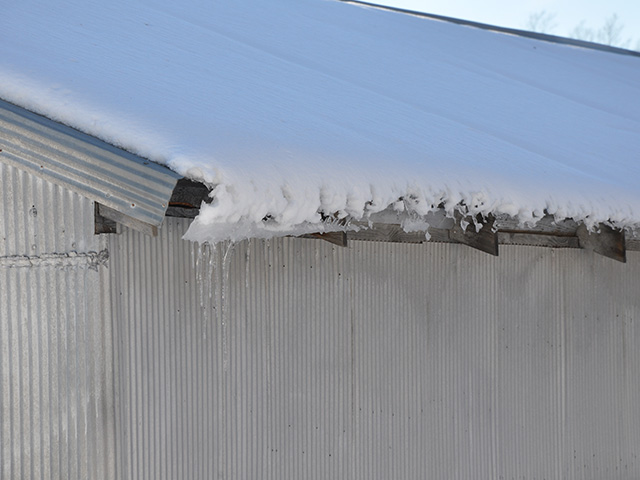 Bonnie Dukowitz
1/23/2016 | 5:43 PM CST
We just stick temporary post(s) for support, which can be easily removed when needed, in the machine shed after putting things away in the Fall.