In the April WASDE report, USDA increased its U.S. soybean export forecast by 25 million bushels (mb) to 2.115 billion bushels (bb) due in part to lower exports from Brazil and Paraguay as our sales have picked up in recent weeks, particularly to China.

The current USDA 2021/22 export projection for Brazil this season is 82.75 million metric tons (mmt) and though down 2.75 mmt from the March 2022 WASDE projection, it is quite a bit higher than the Conab estimate released earlier this month at 77.0 mmt. So the question is: Will further increases in our overseas soybean sales projection be seen in subsequent WASDE reports?

This graphic may shed some light on the situation. It shows U.S. soybeans sold and shipped around April 1 as a percent of the USDA's April WASDE export projection going back to the 2000/01 season on the left-hand axis. On the right-hand axis is the amount of unshipped soybeans as a percent of that April WASDE projection, while also reported is the percent change in the U.S. soybean export forecast from the April WASDE to whatever the final figure is.

For the latest week (written before the April 14 weekly export sales report was released), total soybean sales on the books are 2.063 bb with the amount shipped at 1.631 bb and these are respectively 97.5% and 77.1% of the April WASDE projection of 2.115 bb.

So, it appears that while the sales pace is on track, the shipment pace is lagging and this can be seen in that if total sales are 2.115 bb, we have about 485 mb left to ship by Aug. 31, the end of the marketing year, and that is 22.9% of the final figure, which again, other than the three year period between 2017-2020, is the highest percent left to ship.

For two of those three years this mattered as the USDA lowered its export projection by 123 mb or 6.6% for the 2018/19 and 93 million bushels or 5.3% for the 2019/20 season between the April WASDE and the final figures, the two largest percent cuts since at least to the 2000/01 marketing year. Still a lot of questions as to whether this year's South American soybean shortfall will have a greater impact on future U.S. soybean export prospects for the 2022/23 season as opposed to this marketing year, whether the continued slump in Chinese hog margins quells their interest in U.S. product and how the Russian-Ukraine war plays into all of this. 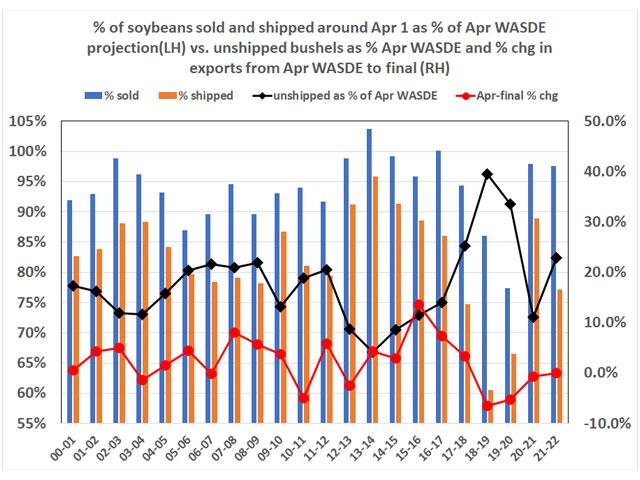