When the USDA released its crop production briefing for the January 10 annual crop production report it did not include the corn ears per acre vs. implied ear weight graphic for the ten objective states usually part of this presentation, perhaps since 8% of the 2019 corn crop was left to be harvested.

Due to this situation, the USDA will resurvey farmers in five northern U.S. states this spring who reported a significant number of un-harvested corn and soybean acres for the government's annual crop production summary with the affected states being Michigan, Minnesota, North Dakota, South Dakota, and Wisconsin.

Note that with the exception of MI and ND, the other three are part of those ten objective states including IL, IA, KS, MO, NE and OH.

The accompanying chart that we created does show these figures using the harvested acreage, yield and ear population per acre data furnished in the annual crop production report released that day.

Recall that the 2019 growing season for corn had a number of challenges, including record spring rainfall that resulted in the latest planting pace for corn ever.

There was also a sort of flash drought for sections of the Eastern Corn Belt part of the summer and another bout of heavy precipitation including both rains and snow during October and November that resulted in millions of acres of corn still left out in the fields when the survey period for the January crop production report ended mid-December.

This resulted in the national corn yield coming in at 168.0 bushels per acre (bpa), the lowest national yield since a 158.1 bpa yield was posted in 2013 and actually given the conditions this year, the 2019 yield is actually quite good.

The impact of last year's weather on yields (which is a function of ears per acre times the weight of each ear) can be seen from the fact that the objective ten state ear population is the lowest since 2012, though the implied ear weight albeit the lowest in four years is still above the seven year average.

Clearly, drought has a much more devastating impact on corn yields than wet weather that results in late plantings and harvesting. 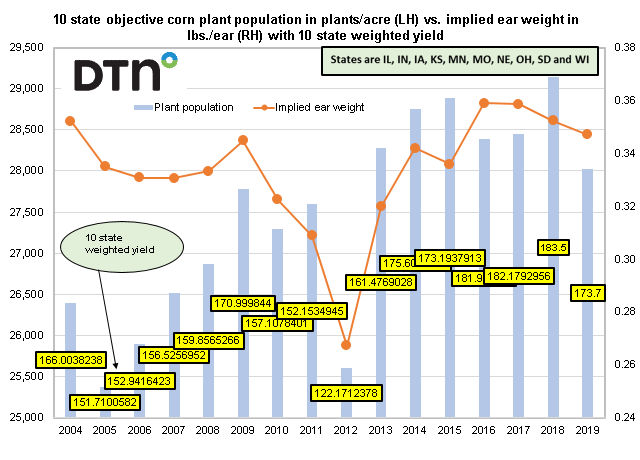