As we have done on a number of occasions this time of year, this graphic shows the new crop November soybean/December corn ratio the day before Thanksgiving on the right hand axis vs. the change in both corn and soybean acreage from the final planted figure the prior year to the following March planting intentions figure on the left hand axis.

This high ratio had the intended effect of increasing planted soybean area and lowering corn acreage.

A general rule of thumb is the average ratio has been 2.37 and a figure over that tends to encourage soybean plantings over corn and a ratio below 2.37 is generally seen as more favorable for corn as opposed to soybean seedings.

Also, the absolute level of prices can be important as high prices for both commodities, regardless of the ratio, could prompt increased seedings of both.

For the spring of 2020 it is expected that both corn and soybean acreage will expand significantly as producers seed a lot of ground that was not able to get planted last spring due to the record rainfall at that time.

It is interesting to note that last year's ratio at Thanksgiving of 2.35 stayed essentially at the same level through the end of March, but there was more trepidation about the impact of the U.S.-China trade war on soybeans as opposed to corn.

The March 2019 planting intentions show corn prospective acreage up 4.1% vs. final 2018 plantings with the March soybean intentions off 5.1%, though the aforementioned wet weather and dramatic move in the SX2019/CZ2019 ratio from 2.39 on April 5th to 1.98 by June 12th resulted in soybean planted area falling a whopping 12 million acres or 13.6% from the final 2018 figure. 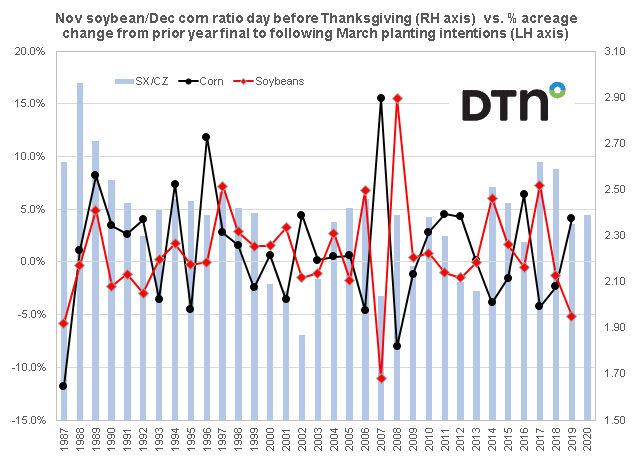