Chicago wheat futures are essentially trading at the highest levels since July having rallied close to 80 cents per bushel since the beginning of September.

In fact, the current spread where spot Chicago wheat futures are at an unusual 36 cent per bushel premium over the spot Minneapolis wheat futures is almost unprecedented.

This is reflected in the following graphic that shows the continuous Minneapolis vs. Chicago wheat futures spread in dollars per bushel from the time period January 2009 to November 2019.

Within the chart is also the long-term average and the plus and minus one and two standard deviation figures.

This latter situation is where we are now as Chicago wheat has never traded this high relative to Minneapolis wheat over the past 11 years.

The only time it has been higher was in early September 2007 when Chicago wheat futures traded as high as 91 cents per bushel over the corresponding Minneapolis contract.

The average spread since January 2009 has been Minneapolis trading 91 cents per bushel over the Chicago contract.

A look at the fundamentals may provide some answers as production of SRW this year was a mere 239 million bushels which is the lowest amount produced in the U.S. of that variety since at least 1984, leading to a SRW stocks-to-use ratio of 38.2%, the lowest in five years.

On the other hand, 2019 production of HRS was 522 million bushels, above the ten-year average of 509 million.

This has resulted in the HRS stocks-to-use ratio coming in this year at 49.6%, the highest figure for that variety of wheat since the 1990/91 season. 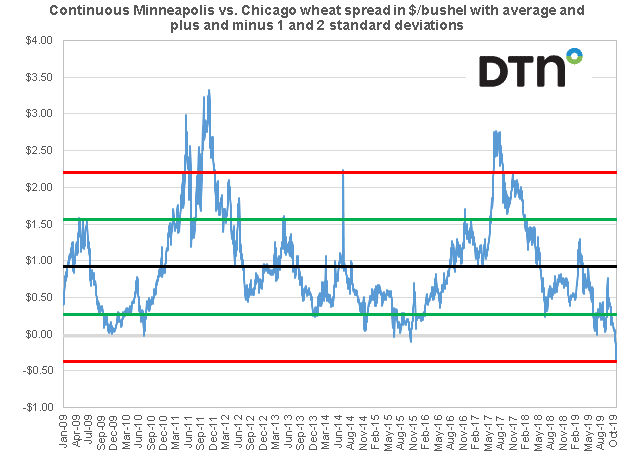