As noted in prior posts, U.S. soybean conditions are running the worst since 2012 though they are quite a bit better now than they were back then.

This graphic is similar to one we did on corn and shows the end of July soybean crop conditions for the top 18 producing states and the U.S. from 1986 to 2019 on the left hand axis.

Also reported at the bottom in the blue circles is the 2019 rank of end of July crop conditions for the period 1986 to 2019.

To start off only five of the top 18 producing states have 2019 ratings above their respective 2018 levels including KS, LA, MO, NC and TN.

Kansas and South Dakota are not faring too well either.

As opposed to the Eastern Corn Belt, the soybean crop conditions are much better as of the end of July.

Such is the case in Tennessee where their end of July rating is 7.5% above average with its tenth based crop rating rate crop rating and Louisiana also seeing its rating 4.9% above its average. 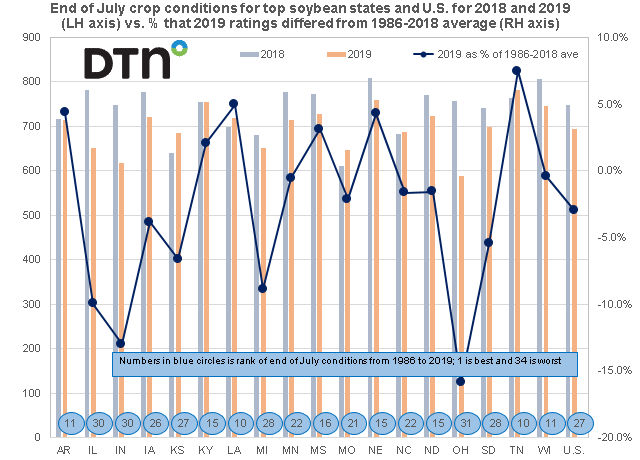