An apparent upward paradigm shift in crop yields, the longer-term damage U.S trade wars have done to our reputation as a reliable grain provider, plateauing domestic demand and ample global stockpiles are four factors that make us generally bearish on the grain and oilseed markets heading into 2019.

In a prior piece we discussed the first item, which is how U.S. corn and soybean yields have really exploded to the upside in recent years with today's hybrids doing exceptionally well in even less than ideal growing conditions.

This post looks at the third item which is plateauing domestic demand.

We are focusing on grain consumption, specifically corn feed use, corn food-seed-industrial utilization less fuel for alcohol and wheat food use.

Lower trending corn values over the past five years have helped resurrect feed demand with the USDA 2018/18 projection at 5.50 bb which would be the highest in 11 years but increased use of ethanol based byproducts like dried distillers grain (DDG) and corn gluten feed (CGF) has helped syphon away some corn feed usage.

Another component that has seen usage slow has been wheat used for food, primarily for flour used mostly for bread, various baked goods and noodles.

Whether it is the anti-carb, anti-gluten, or revolt against many processed foods, wheat used for food purposes had hardly grown over the past decade with annual usage that from 1989 to 2003 averaged a 15 million bushel (mb) gain per year slowing to a mere 3.5 mb growth annually since then.

As for corn, FSI use less ethanol which we took out based on policy directives that resulted in massive use of corn for production of this fuel, corn just used for starch and sweeteners grew by 25.6 mb per year annually from 1989 to 2003 but only by 4.9 mb annual since then. 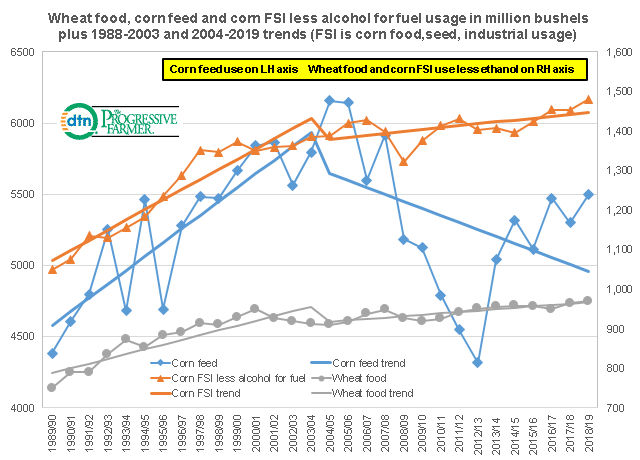