The accompanying graphic shows one of the long-term bearish factors we feel could impact the grain and oilseed markets for the foreseeable future which is the apparent upward paradigm shift in U.S. row crop yields.

The chart shows the percent that U.S. corn and soybean yields deviated from the 20-year trend on the left hand axis and the five-year rolling average of these deviations on the right hand axis.

What is notable about this stretch is weather has not been 100% perfect but today's enhanced seed genetics are able to overcome that barrier and others where the current rolling five-year average of yield deviations is a positive 3.43% which is the highest five-year rolling average going back at least to 1983.

As for soybeans, yields have also been above trend for five straight seasons, though as in corn, there was a six-year stretch of above-trend yields from 1996 to 2001.

The current five-year rolling average of percent deviations from trend at up 3.11% is also the highest in this regard going back at least to 1983.

In prior posts we noted that U.S. crop yields are outpacing demand and if this trend spreads to overseas producers, this could lead to further increases in global stockpiles and result in even greater price pressure for key crops. 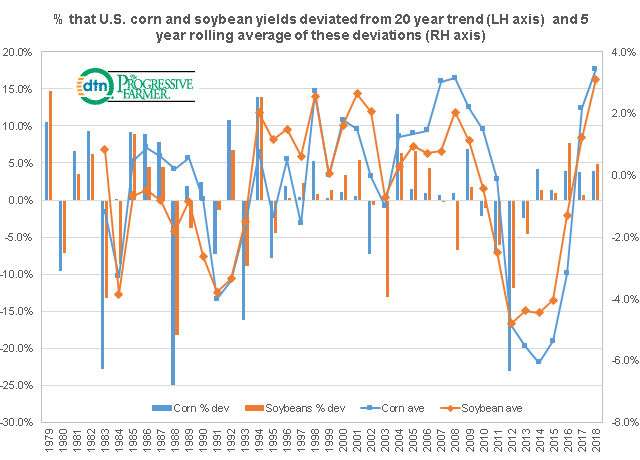