New crop soybean sales were already running at the slowest pace in years when the USDA actually boosted its 2017-18 U.S. soybean export projection by 75 million bushels to 2.225 billion, a new record citing larger supplies and lower price forecasts in response to greater than anticipated domestic 2017 production.

One argument in the USDA's favor is their constant understatement of final export demand over the past few years.

This year's 2.150 billion bushel figure is 200 million higher than their August 2016 projection for this year's marketing season that will end of August 31st.

This graphic shows the new crop U.S. soybean sales in million bushels as of the third week in August, just before the new crop season starts.

The latest export sales report showed U.S. new crop soybean sales at 365.3 million bushels and this is the lowest level of exports as of the third week of August since the 2008-09 season.

With the latest WASDE export projection at 2.225 billion bushels the current sales pace is a mere 16.4% of new crop sales, the lowest figure in this regard since the 2006/07 marketing year when they were 15.3%.

This is the third year in a row where the U.S. share of global soybean trade has increased though the current level is well below the 60% share that the U.S. used to command prior to the year 2000. 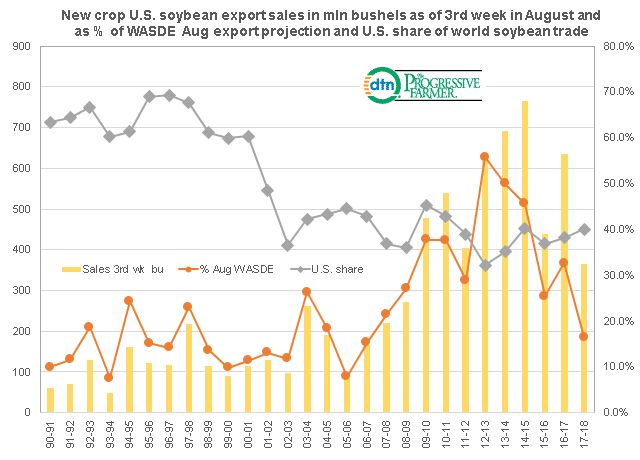