Continued cool temperatures throughout much of the Corn Belt this month has been beneficial for corn and soybean development, limiting heat stress and conserving moisture in areas where precipitation has been light.

There are concerns that these below average readings are contributing to a significant lag in growing degree day accumulation for the corn crop in more northern locales, a rather relevant consideration as September is a week away.

Though the National Weather Service 30 day forecast for September calls for normal temperatures through much of the Corn Belt, their 6-10 day and 8-14 day forecasts call for continued below to much below average readings.

This past week's USDA crop progress and condition report noted that 29% of the nation's corn crop was in the dent stage as of week 33 vs. 37% last year for week 33 and the five-year week 33 average of 35%.

Michigan 11% is actually above their average and MIN and SD are just slightly below average. ND appears to be behind with just 6% in the dent stage as of this past Sunday vs a 13% average though from the period 2008 to 2016 where were just two years when the ND % of corn denting as of week 33 was above 6%.

Wisconsin at 5% is also below its average 9% in the dent stage though a good part of this states corn crop is harvested for silage.

The real question is whether this lagging development will result in some corn not being physically mature prior to the onset of the first fall freeze though weather over the next four weeks will be the ultimate arbiter.

Perhaps a more cogent factor is the lagged state of development could leave many corn plants in these northern states with high moisture at harvest that could require increased use of liquid propane to dry down the crop, a less than desirable outcome for many producers looking at yet another year of depressed crop values. 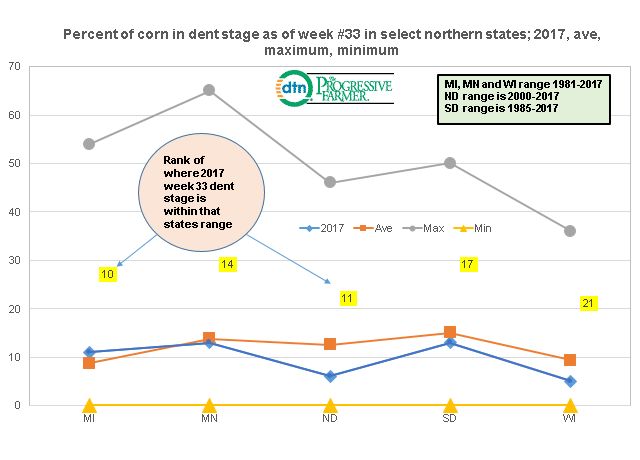