As opposed to past years when the USDA often understated final demand for U.S. soybeans that is certainly not the case this year as a record yielding and producing U.S. crop has been followed up by monstrous South American production with U.S. ending stocks at ten year highs and the global soybean carryout the highest ever.

As bearish as this situation appears, the outlook for prices next year could be even more desultory if intentions by U.S. farmers to seed the highest amount of soybean acres ever proves true.

Going across the x-axis is planted acreage in millions while going down the y-axis are possible yields in bushels per acre.

As an example, if 89.0 million acres were planted, with the Feb Outlook yield forecast at 48.0 bushels per acre(bpa), the intersection of that column and row shows a 469 million bushel figure.

The way that is arrived at is taking 89.0 million acres and multiplying that by 99% which is the five year average harvested to planted ratio and then by 48.0 bpa to give a production figure of 4.229 billion bushels.

The actual USDA soybean prospective planting figure was 89.5 million so splitting the difference between the 89.4 and 89.6 million acre planted with a 48.0 bpa yield cells results in an ending stocks figure of 493 million bushels. 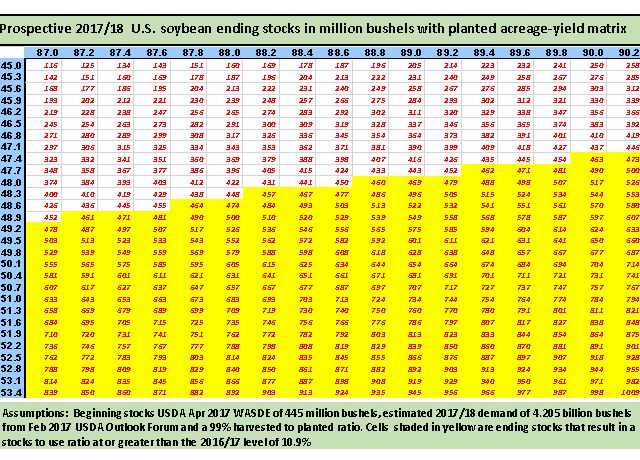