With the planting intentions report coming up want to focus some attention on the state of North Dakota that has seen massive shifts in the mix of crops planted since the start of this century.

We make mention of the fact that other than Iowa, this is the state that has the largest mix of principal crops planted than any other and this includes all the feed grains, wheat, rye, rice, soybeans peanuts, soybeans, canola, edible dry beans, peanuts, sunflower, cotton, potatoes, proso millet and sugarbeets.

We have written before about why some of the traditional crops that used to be seeded there such as hard red spring wheat, durum wheat, sunflowers, barley and sugarbeet acreage has declined with others such as canola and dry edible beans holding steady in favor of a massive rise in both corn and soybean plantings.

The most tangible reason is the superior net return per acre figures for those two commodities compared to the traditional crops that typically would be sown, especially for soybeans.

Technology has also played a role with the yield gap between full season hybrids and those for the shorter season varieties that are typically planted in North Dakota narrowing substantially over the past few years.

Some even point to climate change as weather conditions appear more moderate with regard to soil temperatures, growing degree days, last and first freeze dates and air temperatures allowing more temperate crops like corn and soybeans to be planted as opposed to wheat and specialty oilseeds that are more tolerant of colder temperatures and more sparse precipitation.

This graphic shows the acreage trends for barley, dried edible beans, canola, corn, soybeans, sugarbeets, sunflowers and spring wheat from 2000 to 2016 and within the box is the compound annual growth rates (CAGR) for each. Note that both corn and soybean acreage has more than tripled since 2000 with each having a CAGR over 7.5%.

This increase in seedings has come at the expense of both barley and sunflowers where planted acreage has been pared at least by half over the past 16 years along with a decline in sugarbeets and sunflowers. 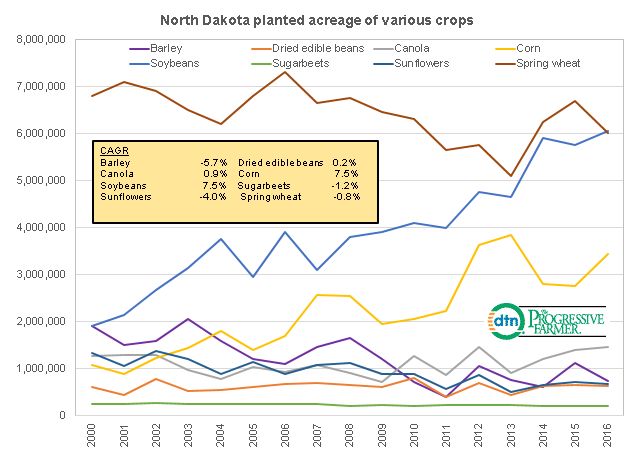