We had commented on soybean oil's share of the soybean crush value back in June when it was a historically low 26-27% of the combined crush value.

We noted at the time that the longer-term seasonals as represented by the 20 and 30 year averages did show values bottoming around that time of year and since then soyoil's share of the crush value has increased markedly now up to 35%.

Fast forward to mid-October and the soybean oil share of crush value seasonal which as mentioned in prior posts has been uncannily accurate now show a distinct downward trend that lasts for a period of four to six weeks.

Reasons for the surge in soybean oil which has rallied to over two year highs is an upturn in the palm oil market linked to falling production, a tightening situation for the world vegetable market in general with global ending stocks contracting for the third year in a row, and the upturn in crude oil prices which has enhanced the profitability of biodiesel production.

On a spread basis, oil has firmed vs. soybean meal which has seen a very weak cash basis and a very sluggish start to export sales for the 2016/17 marketing year.

Some may say with the weak fundamental situation for soybean meal that soybean oil's share of the crush value will continue to increase but at least for now we are willing to respect the seasonality that is plotted in the accompanying graph. 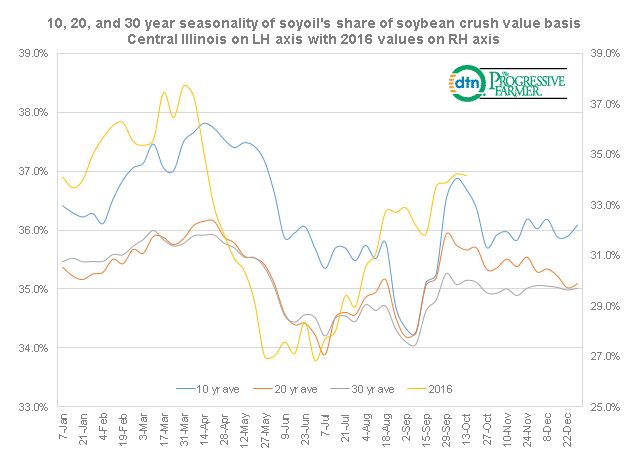