In fifty years, from 1961 to 2011 corn's share of the U.S. feed grain (barley, corn, oats and sorghum) production moved from 70% to as high as 97% but over the past five seasons that percent has started to decline.

There are a number of reasons why corn's share of feed grain output increased over the years but foremost has been the technological developments in corn seed genetics that have resulted in a dramatic jump in yields, increasing now by an average of two bushels per acre per year.

That has enhanced net returns per acre for that grain far more than seen for barley, oats or sorghum. We have also seen increased corn feed use in areas that used to contain more barley and sorghum in the livestock and dairy rations with the advent of the multi-unit shuttle trains.

More recently has been the nation's renewable fuels policy where the amount of corn used for ethanol increased by tenfold in the period of 15 years and that also increased the attractiveness of growing corn vis-vis the other feed grains.

In recent years, corn's share of feed grain output has started to decline slowly as many of the factors cited above are no longer relevant.

The record high prices seen over the past few years have faded given increased foreign corn production and ethanol's utilization of corn having plateaued.

Strong soybean prices linked to insatiable Chinese import demand has resulted in increased seedings of that oilseed at the expense of corn in many areas of the Midwest.

Meanwhile the surge in corn seedings in the drier areas of the Plains that had been more economically feasible even with their lower yields based on the high corn prices has shifted due to falling corn values and increased drought in that part of the country resulting in greater sorghum seedings, a crop far more tolerant of drier conditions.

A final point noted in a recent USDA article is that the tremendous growth of the craft beer industry over the past decade has increased the usage of specialized malt barley as these brews use anywhere from three to seven times the amount of barley as required for the typical "American" lager varieties. 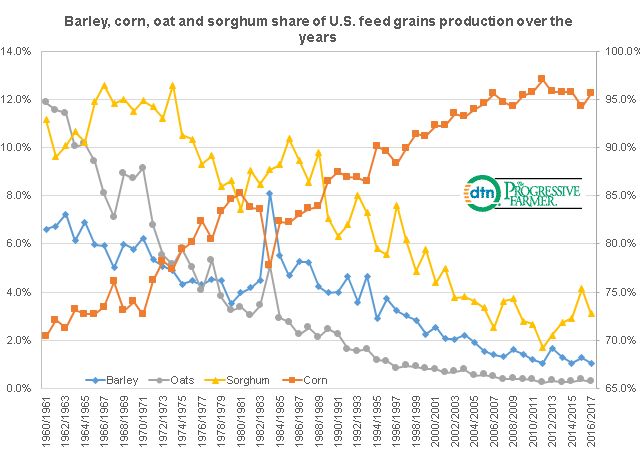