After a strong springtime rally linked to much lower South American soybean production than had been forecast and fears that a La Nina weather event would adversely impact the U.S. soybean crop, soybean meal futures have been in full retreat over the past four months.

The December contract is making new lows for the move falling below the $300/short ton level and is now in position to test the spring lows near $256/ton which is the lowest value for this market since March 2010.

A number of factors have pressured this market including the realization that this year's soybean crop will be monstrous with both output and yields smashing the old records by large margins.

Domestic usage has been constrained by very good pasture and forage conditions for the main feeding areas of the country at a time when livestock and dairy margins are being pinched to a high degree.

Perhaps the most bearish factor has been a major slowdown in export sales with the outlook for the new crop year starting Monday one of the weakest in recent seasons.

The specifics include current new crop sales at 2.083 million metric tons which is the lowest figure for this stage of the marketing year since 2011 and with the USDA projecting 2016/17 soybean meal exports at 11.156 million metric tons these sales represent 18.7% of this total, the lowest percent also since the 2011/12 season.

Note the current USDA export projection is a record so sales will have to accelerate to meet this target.

Over the past five seasons in response to a strong early season export pace the USDA has increased its export projection from the September estimate contained in the WASDE report to the final figure anywhere from 136,000 metric tons last year to as much as 3.942 million in the 2012/13 season but it appears an export reduction at least for now appears more likely. 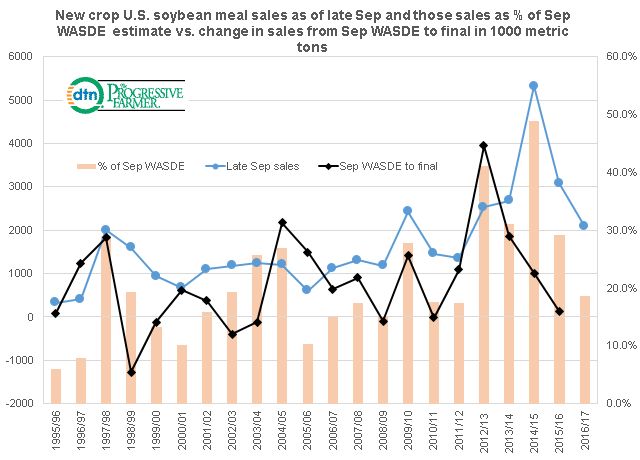