For farmers, market action has been gruesome over the past few weeks with wheat now trading at 11 year lows, corn at six year lows and soybeans likely to test six year lows some point this fall.

Many reasons are behind these depressed values including a retrenchment for all commodities from the super-cycle that began back in 2000.

The move earlier this year by the U.S. dollar to 13 year highs in the foreign exchange markets pressured commodities and has made our agricultural exports more expensive to foreign buyers.

The surge in grain and oilseed prices to record highs a few years ago brought in a lot of foreign production while the end of the big renewable fuels boom has also weighed on prices.

Finally, for the most part weather conditions in most of the key producing countries and regions of the world has been quite good in recent seasons leading to bumper harvests of most crops.

This has certainly been true in the U.S. as our corn yields have been record two out of the past three years, soybean yields setting records now for three years in a row and our all wheat yield attaining all-time highs for three of the past five years.

What makes 2016 so unique is that for only the seventh time since 1924 have yields of the three major crops, corn, soybeans and wheat set record high yields in the same year, the first time since 1979. 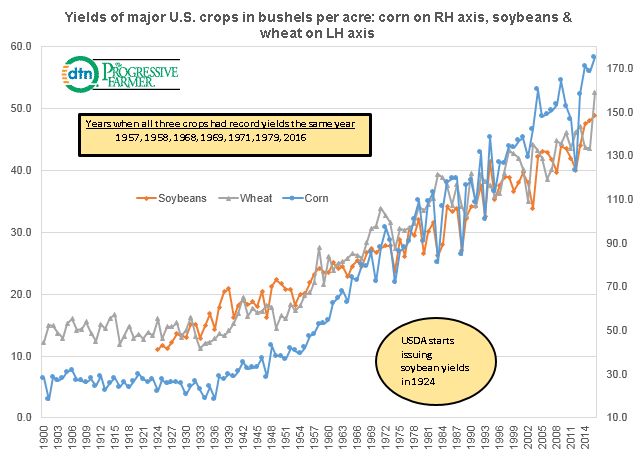