The USDA will released its second field based crop production report on Monday and trade expectations estimated corn yield down 1.5 bushels per acre (bpa) from the August record projection of 175.1 bpa estimate given last month. Corn's actual yield estimate was reduced from 175.1 to 174.4 bushels an acre.

As mentioned a number of times in the past, there is mounting concern that a warmer than usual summer in the Midwest has speeded the corn crop to maturity at the expense of starch accumulation resulting in lighter weighted than normal ears.

Early yield reports so far are seeing results below year ago levels and expectations though again the worst stuff usually gets cut first.

This graphic reports the August 2016 average temperatures for the top 21 corn and corn producing states and the difference between last month's reading and the 1960-2015 average August temperature, both in degrees Fahrenheit.

The graphic shows that only four states had below average August temperatures including CO, KS, NE and TX and these are all Plains states.

A number of states including IL, IN, KY, MI, MS, NC, OH, PA, TN and WI were well above average.

A number of states had their 7th hottest August since 1960 including IL, TN and WI.

We should note that large sections of New England, the mid-Atlantic and parts of the Eastern Corn Belt are and have been in a severe drought which no doubt was exacerbated by these lofty summertime temperatures. 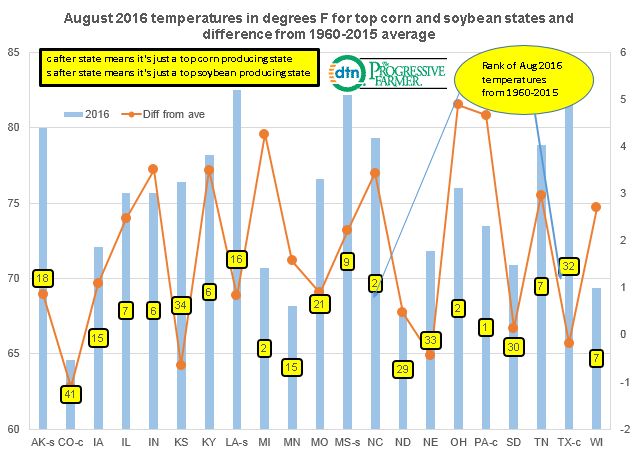